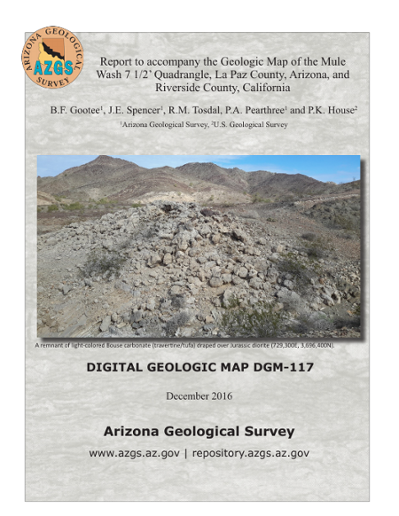 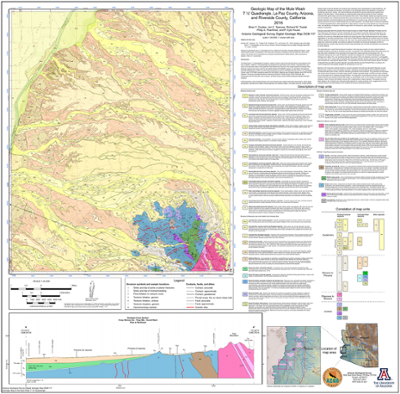 The Mule Wash 7 ½' Quadrangle is located in western Arizona east of the Colorado River and southeast of the town of Blythe, California. The Quadrangle encompasses the west flank of the northern Trigo Mountains and most of the east-west extent of the piedmont that extends from the foot of the range toward the Colorado River. Geologic mapping was done under the joint State-Federal STATEMAP program, as specified in the National Geologic Mapping Act of 1992, and was jointly funded by the Arizona Geological Survey and the U.S. Geological Survey under STATEMAP assistance award #G14AC00424. Mapping was compiled digitally using ESRI ArcGIS software. Previously unpublished bedrock mapping by Richard Tosdal (former USGS employee) was incorporated into the map with minor revisions, and Kyle House (current USGS employee) assisted with field mapping. Surficial geologic units including tributary and river deposits were mapped using field observations, stereo aerial photographs, georeferenced digital orthophotographs and satellite imagery, and digital elevation models (DEMs). Relative ages of alluvial deposits and surfaces were estimated using characteristics of clast weathering, soil development, carbonate accumulation, and position in the landscape. Most of the piedmont is covered by Quaternary alluvial fan, terrace, and channel deposits transported by alluvial systems that originate from adjacent Trigo Mountains. These deposits are predominantly locally-derived gravel with minor reworked Colorado River gravel clasts, and local and Colorado River sand. These tributary Quaternary deposits are thin, and only partially cover underlying Colorado River sand and gravel and older tributary fan deposits. Most of the tributary deposits covering the piedmont are late Pleistocene or younger in age, with uncommon to rare high deposit remnants that record middle Pleistocene and older deposition. The lateral extent of Holocene deposition is confined topographically by older deposits, but valley bottoms covered by young deposits are commonly quite wide, and distribution of deposits of different ages within the Holocene is quite complex, recording shifting patterns of deposition. Deposits associated with the Colorado River include the early to middle Pliocene Bullhead Formation and the late Pleistocene Chemehuevi Formation Essentially all of the exposures beneath Quaternary deposits in the valley are Bullhead Formation sand and rounded exotic gravel (Tcb), with silt and clay beds (Tcbf). Bullhead deposits are commonly interbedded with tributary fan gravel deposits (Tfg2). Bullhead deposits record massive aggradation by the early Colorado River in the early to middle Pliocene following an unknown amount of erosion of Bouse deposits. Chemehuevi Formation silt, clay, sand, and gravel deposits (Qch) are found fairly close to the valley axis, where they typically are banked up against and draped over erosional topography formed on Bullhead deposits. Locally, fairly prominent fluvial scarps associated with Chemehuevi deposition are preserved as strat deposits.