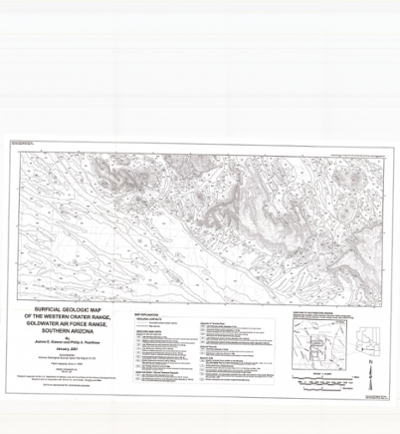 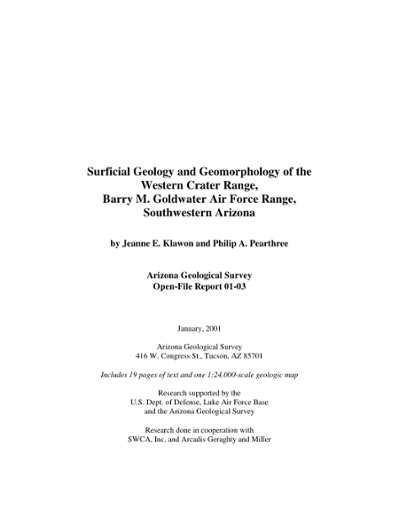 This report summarizes the surficial geology and geomorphology around the western part of the Crater Range, situated in the North Tactical Range on the Barry M. Goldwater Air Force Range in southwestern Arizona (Figure 1). The purpose of these investigations is to describe the geologic and geomorphic framework of the western Crater Range and surrounding areas in conjunction with an archaeological survey that was conducted for the Air Force by SWCA, Inc, and Arcadis Geraghty and Miller (Tucker, 2000). Field investigations and mapping were done in the spring of 1998. A 1:24,000-scale map showing the surficial geology of the survey area is included with this report (Plate 1). Interpretation of aerial photographs, field checking, and mapping was done primarily by J. Klawon, with field assistance and suggestions from P. Pearthree. Several previous geologic investigations have been conducted in this area. Kirk Bryan explored this area as part of a project to locate and evaluate potential water sources (Bryan, 1925). He described the general geology and physiography of this area, and made many astute observations about the processes that have shaped this landscape. This portion of Arizona was mapped on a reconnaissance basis by E.D. Wilson and R.T. Moore as part of their efforts to develop a 1:500,000-scale geologic map of Arizona (Wilson and others, 1969). The bedrock geology of the Ajo 1:250,000-scale sheet, which includes the project area, was subsequently mapped in somewhat more detail by Gray and others (1988). The generalized surficial geology of the Ajo sheet was mapped by Morrison (1983) at 1:250,000 scale. Bull (1991) developed a conceptual framework for understanding the impacts of climatic changes on arid region fluvial systems of the lower Colorado River region.