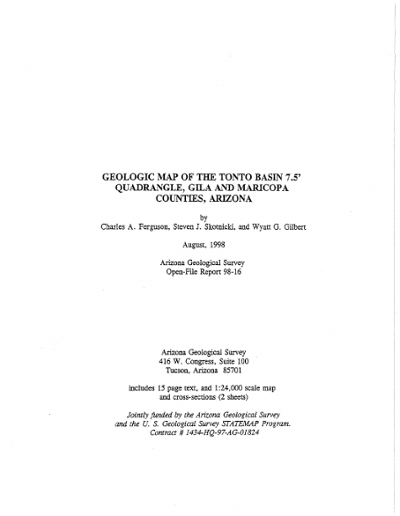 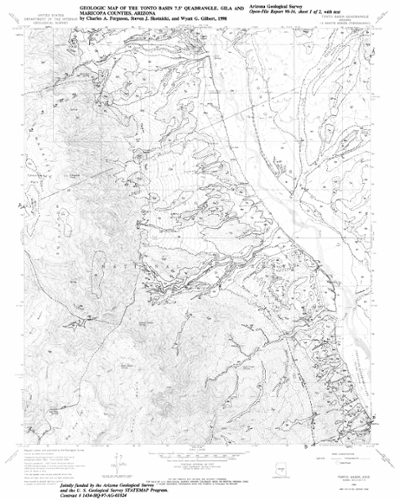 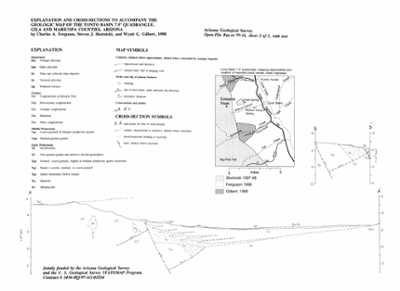 Tonto Basin is a Mid-Tertiary, west-tilted half-graben located in the Transition Zone tectonic province of central Arizona (Figure 1). Along with the northerly adjacent Payson Basin, Tonto Basin is bounded on the west by a major east-side-down normal fault that accomodates at least 3,000' of displacement. In the Payson basin, the basin-bounding fault was named Payson fault (Muehlberger, 1990) and it forms the abrupt, east-facing escarpment of the Mazatzal Mountains. The western basin-bounding fault of Tonto Basin is also referred to as Payson fault, even though there is an abrupt change of strike where the two basins merge (Figure 1). The eastern margin of both basins is defined by a gentle, west-dipping, depositional unconformity with Proterozoic rocks of the Sierra Ancha (Martin, 1990; Mayes, 1990). Tonto Basin is filled with Miocene and younger mudstone and conglomerate that in general dip gently to the west. Locally along the western margin of the Tonto Basin and in the center of Payson Basin (Muehlberger, 1988), an older sequence of east-tilted conglomerates are present suggesting a complex structural history along the Payson fault. A sequence of Pliocene and younger conglomerate and mudstone in the Payson basin overlap the Payson fault (Muehlberger, 1988), and are probably equivalent with a sequence of flatlying, post-tectonic, younger Tertiary conglomerates in the Tonto Basin which also bury the Payson fault. Report and geology of the Tonto Basin 7.5' Quadrangle, Gila and Maricopa Counties, Arizona. scale 1:24,000.