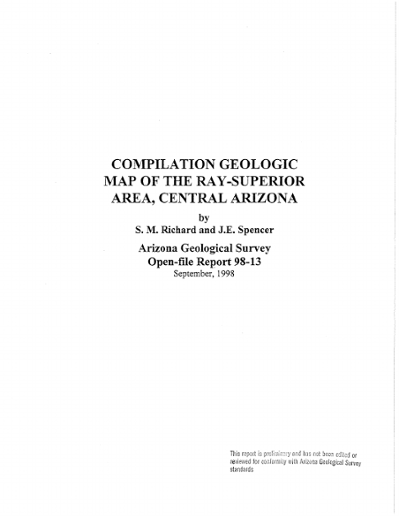 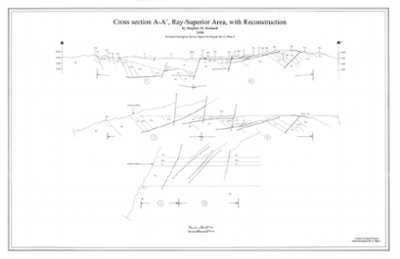 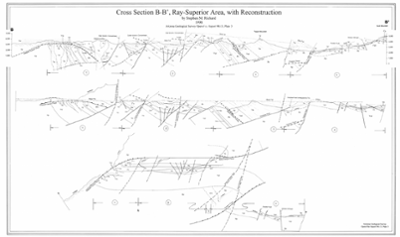 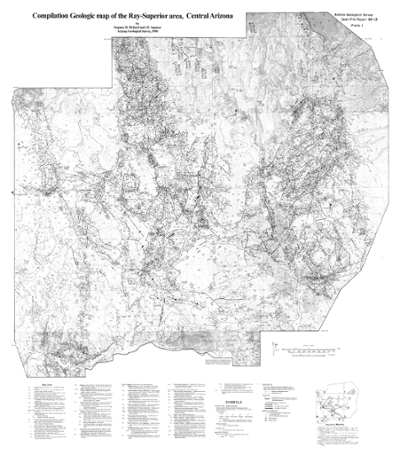 This geologic map was produced to compile and reinterpret published geologic information, and present the result of new geologic mapping in the Ray-Superior area. This data set serves as the basis for ongoing efforts to better understand the geologic history of this area, particularly with respect to the distribution and origin of mineral deposits. This compilation is based on published USGS and Arizona Geological Survey geologic maps of the Picketpost Mountain [Peterson, 1966; Spencer and Richard, 1995], Superior [Peterson, 1969], Pinal Ranch [Peterson, 1963], Mineral Mountain [Theodore et aI., 1978], Teapot Mountain [Creasy et aI., 1983], Sonora [Cornwall et aI., 1971], North Butte [Richard and Spencer, 1997], and Grayback [Cornwall and Krieger, 1975] quadrangles. More detailed mapping by Stan Keith in a strip west from the Ray Mine to the belt of Apache Group strata south of Picketpost Mountain was part of a master's thesis project that was completed as an Arizona Bureau of Geology and Mineral Technology OpenFile Report [Keith, 1983]. Detailed 1: 12,000-scale maps from this report have been generalized as necessary to show at a scale of 1:24,000 for this compilation. Several faults shown in the northern Dripping Spring Mountains, separating Apache Group strata and diabase (Y d), have been inferred from the distribution of units in the Apache group, based on mapping by Cornwall and Krieger [1971]. The geology around the Ray pit is based on Keith [1983], Creasy et ai. [1983], Cornwall et ai. [1971], and John [1994]. A particular problem in this area is the major modifications to the terrane resulting from mining operations. The location of the earth's surface in the mine pit changed significantly between the time Cornwall et ai. and Creasy et ai. did their mapping (1965-1970), Keith did his mapping (early 1980's), and John did his mapping (early 1990's). Because the contour lines on the base map indicate the earth's surface in the early 1960's, east of the Diabase fault, the geology shown is from Cornwall et al. [1971]. The pit limit shown on the map is from John [1994]. Geology west of the Diabase fault and within the 1994 pit limit is from John, and thus is unrelated to the topography shown on the base map. Dumps and tailings now bury large areas adjacent to the pit that were exposures of bedrock when the various maps were made. The patterned area on the base map approximates the area affected by mine operations. The map shows outcrops that are now buried but had previously been mapped within these areas. Compilation Geologic Map of the Ray-Superior Area, Central Arizona Scale 1:24,000