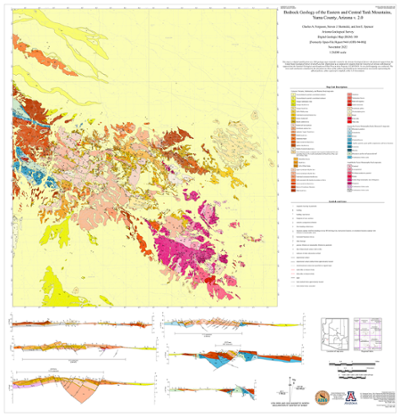 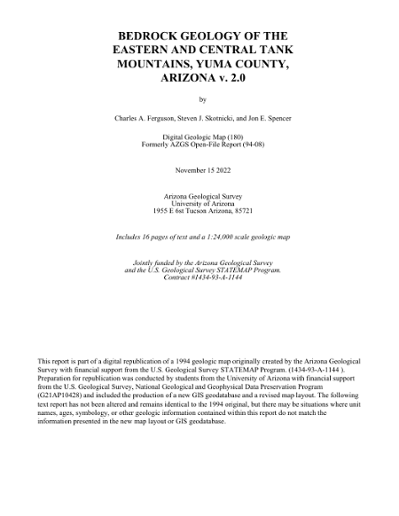 The Tank Mountains of southwestern Arizona are a west-northwest trending range which represent an approximately 30 km-Iong extension of a southeastern arm of the Kofa Mountains. On all other sides, the Tank Mountains are surrounded by gently southeastsloping Quaternary peidmonts of the Gila River drainage basin; Palomas Plain on the north, east, and south and King Valley on the southwest. Elevations in the Tank Mountains are between 2,200' and 900', and in general elevation decreases to the southeast. The Tank Mountains lie within the Sonoran biozone, and although there are no active springs, washes within the range that cut into bedrock are renowned for deep potholes or "tanks" which hold water for long periods of time. The mountain range derives its name from these features, the most prominent of which is White Tanks in the north-central part of the range. Originally, the western Tank Mountains were known as the Frenchman Mountains, and the southeastern part of the range were called the Puzzles Mountains (Wilson, 1933). There are only five formally recognized place names in the map area according to the 7.5' USGS quadrangles (Palomas Mts. NW, NE, SW, SE). Two other informal place names are used in this report and they are identified on Figure 1. The informal name Malley mesa is derived from a triangulation station at the crest of the prominent mesa at the northeast terminus of the Tank Mountains. Dummy gulch is a major southeast flowing wash in the eastern Tank Mountains named by local inhabitants for a dog named "Dummy" who was lost there chasing deer during a family outing. Apparently the dog's name was given before this episode. Most of the western Tank Mountains, including the White Tanks area, lies within the east arm of the Yuma Proving Ground, and access is restricted. The Proving Ground boundary is not delineated by a fence, and warning signs are sparse. Access to the eastern Tank Mountains is provided by two primitive road systems which can be reached from a paved county road connecting the towns of Hyder and Dateland. These primitive roads, known to the locals as the "low road" and the "high road", can usually be negotiated with high-clearance two-wheel-drive vehicles well into the Tank Mountains, but local inquiry into their condition is recommended. The "low road" turns north from pavement near White Wing Ranch and follows Hoodoo Wash around the eastern termination of the Palomas Mountains, before it turns west and splits into a number of tracks that follow south-flowing washes draining the southeastern Tank Mountains. The "high road" runs north from pavement just east of White Wing Ranch about 15 miles before it turns west and splits into a number of tracks that can be followed southward from Palomas Plain into the Tank Mountains. The only connecting route between the "high road" and "low road" networks is at White Tanks on the Yuma Proving Ground, and this road is barely passable to even the most rugged 4-wheel drive vehicle. Bedrock geology of the eastern and central Tank Mountains, Yuma County, Arizona; report and two map sheets, scale 1:24,000.