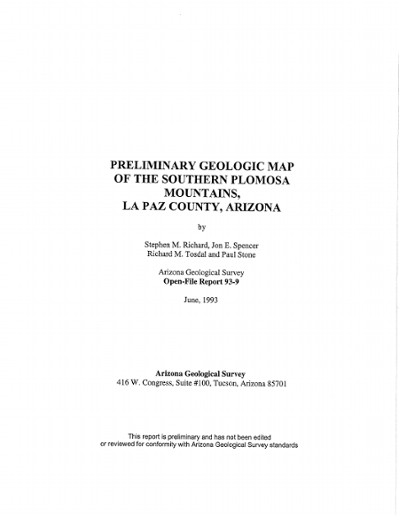 The southern Plomosa Mountains were the first range in west-central Arizona for which a published geologic map was available [Miller, 1970], and has received more study than most other ranges in the region [Miller, 1966, 1970; Miller and Morton, 1971; Harding, 1978; Robinson, 1979; Davis, 1985; Reynolds et al., 1986; Lerch, 1990], but the geology of this area and its relation to adjacent ranges remains confusing. The map area is located in west central Arizona, in the eastern part of the Maria Fold and thrust belt [Reynolds et al., 1986] (Figure 1). In order to elucidate the relationship between Mesozoic and Tertiary structures in the area, clarify the Mesozoic stratigraphy, and compare the style of mineralization in the southern Plomosa District with that in the Little Harquahala and Harquahala Districts, we have remapped the southern Plomosa Mounains at a scale of 1:24,000 [this map] and locally at 1:12,000 [Richard, 1991; Richard and Spencer, in prep.]. This report summarizes the lithology of rock units on the 1:24,000 scale map, provides a brief discussion of our thinking about the structure and stratigraphy, and a summary of the style of mineralization observed in the area. (27 pages)