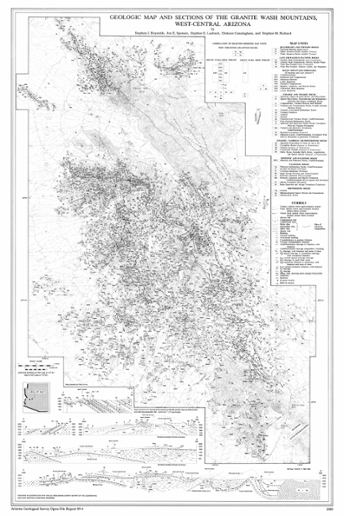 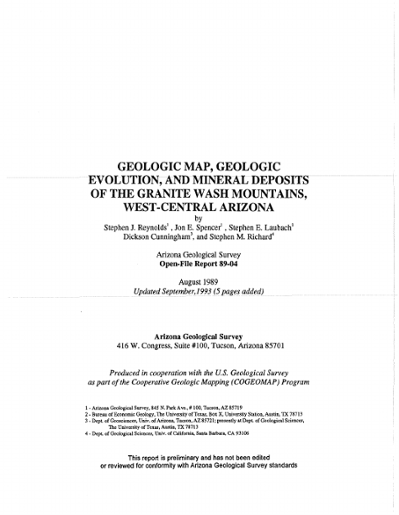 The Granite Wash Mountains are located in west-central Arizona and are contiguous with the Harcuvar Mountains to the northeast and the Little Harquahala Mountains to the south. They are part of the Maria fold and thrust belt, a belt of large folds and major thrust faults that trends east-west through west-central Arizona and southeastern California (Reynolds and others, 1986). In the Granite Wash Mountains, late Mesozoic deformation related to the Maria belt affected a diverse suite of rock units, including Proterozoic crystalline rocks, Paleozoic carbonate and quartzose clastic rocks, and Mesozoic sedimentary, volcanic, plutonic, and hypabyssal rocks. This deformation was mostly deep seated and produced an assortment of folds, cleavages, and both ductile and brittle shear zones. Several discrete episodes of deformation occurred, resulting in refolded folds, folded and refolded thrust faults, and complex repetition, attenuation, and truncation of stratigraphic sequences. Greenschist facies metamorphism accompanied deformation and was most intense along the major thrusts. Deformation and metamorphism were followed by emplacement of two Late Cretaceous intrusions and numerous dikes. (51 pages)