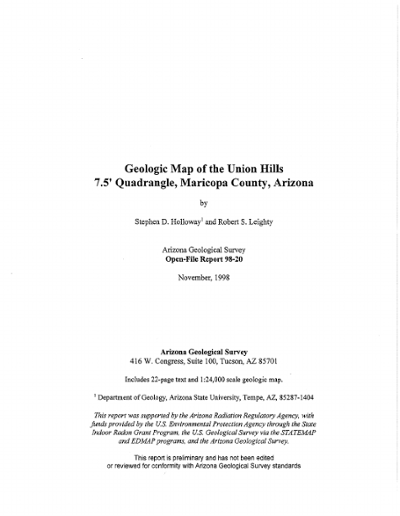 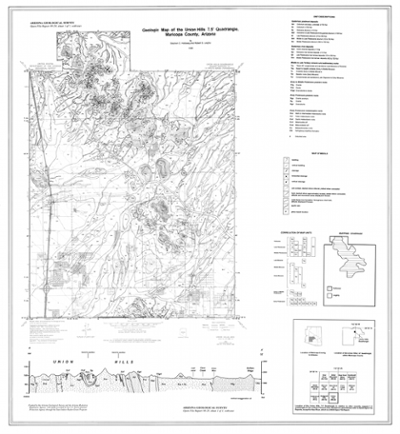 The Union Hills 7.5-minute Quadrangle is located in the Phoenix metropolitan area. The quadrangle is located north of downtown Phoenix and is bordered by Paradise Valley to the north and east, and the Phoenix Mountains to the south (Figure 1). The quadrangle is bounded by latitudes 33°37'30"N and 33°45'00''N, and longitudes 112°00'00"W and 112°07'30"W. The area south of the Union Hills has become highly urbanized during the last few decades and is still undergoing rapid population growth. Thus, the knowledge of the distribution and character of bedrock and surficial deposits is important to make informed decisions concerning management of the land and its resources. Geologic mapping of the Biscuit Flat Quadrangle is related to other 1:24,000 scale mapping projects in and around the Phoenix metropolitan area (Figure 1; see map plate). Geologic mapping of bedrock in the quadrangle was based on field mapping, whereas surficial mapping was based upon field observations, and the interpretation of aerial photographs and soils maps. The respective mapping coverage accomplished by each author (i.e., Holloway and Leighty) is shown on the map plate. A limited amount of unpublished Arizona Geological Survey mapping (by Steve Reynolds and Mike Grubensky for the Phoenix North 1:100,000 scale geologic map) augmented the new mapping of this report. Also, the 1 :24,000 scale mapping of Tertiary rocks by Jagiello (1987) is locally similar to that of this report. Aerial photography includes a series of black-and-white, 1 :20,000-scale (dated 1-19-70) and 1 :40,000 scale (dated 9-6-92) photos. Soil information was compiled from USDA Maricopa County soil surveys (Hartman, 1977; Camp, 1986). This project was supported by the Arizona Radiation Regulatory Agency, with funds provided by the U.S. Environmental Protection Agency through the State Indoor Radon Grant Program. Geologic map of the Union Hills 7.5' Quadrangle, Maricopa County, Arizona - report and one map sheet, scale 1:24,000