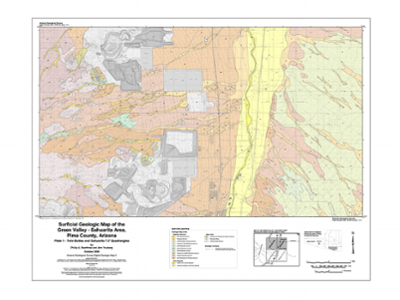 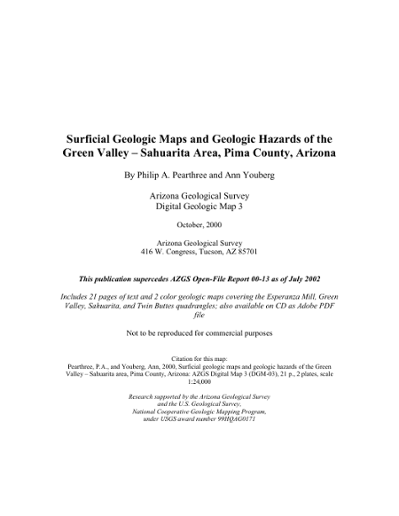 This report and accompanying maps describe the surficial geology, geomorphology, and geologic hazards of the rapidly developing Green Valley – Sahuarita area on the southern fringe of the Tucson metropolitan area. The mapping covers the Esperanza Mill, Green Valley, Sahuarita, and Twin Buttes 7 1/2’ quadrangles (Figure 1). Most of the area is in unincorporated Pima County, but it includes the small but rapidly growing Town of Sahuarita. The whole map area is within the drainage basin of the Santa Cruz River, a major, north-flowing regional drainage that roughly bisects the four quadrangles. These maps cover most of the Santa Cruz Valley (this area can also be considered the southern part of the Tucson basin) between the Santa Rita Mountains on the east to the Sierrita Mountains on the west. There are several potentially conflicting land use issues in the area covered by these maps. It encompasses the southern fringe of the Tucson metropolitan area, which is experiencing rapid development and population growth. The western part of the map area includes several large open-pit copper mines that have been active for several decades. Much of the eastern part of map area is within the Santa Rita Experimental Range and Wildlife Area, a government-owned preserve that is undeveloped and will remain that way for the foreseeable future. Intense urban development has occurred and is continuing in the Green Valley area. Major developments have been proposed for the Canoa Ranch area along the Santa Cruz River. Rapid development is beginning in Sahuarita, which is on the suburban fringe of the Tucson metropolitan area. This report is intended to enhance our understanding of the surficial geology of the Green Valley – Sahuarita area and to aid in assessing and understanding geologic hazards in this area. This new mapping complements previously published mapping that focused on the bedrock in the area (Drewes, 1971; Cooper, 1973). Map focus is Holocene - Pleistocene alluvium and river deposits. Bedrock is undifferentiated. (map scale:1:24,000; projection: UTM Zone 12, NAD83).