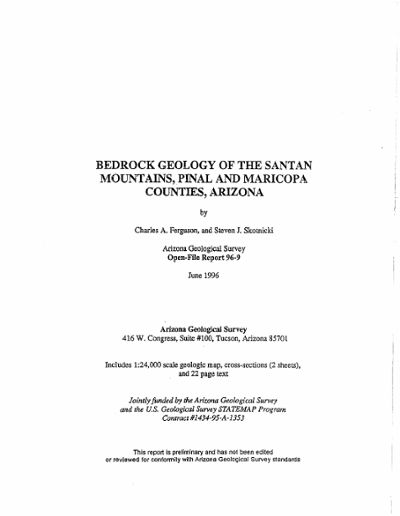 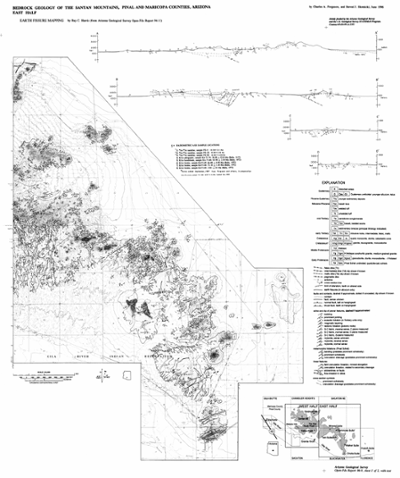 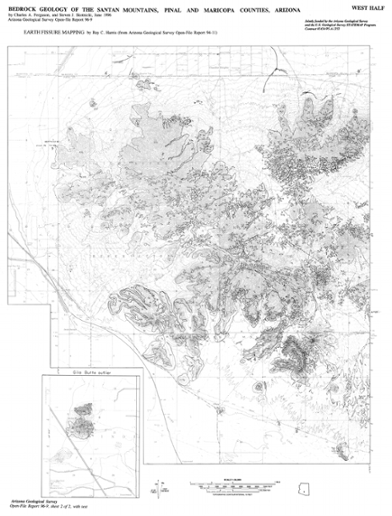 The Santan Mountains are a 25 km long, west-northwest trending uplift composed chiefly of Proterozoic and Cretaceous crystalline rocks overlain in the central and eastern part of the range by Mid-Tertiary sedimentary and volcanic rocks. Santan Mountain at an elevation of 3010 feet is the range's highest point, rising nearly 1700 feet above the basin floor. Elevations decrease rapidly to the southeast towards the Gila River. The eastern two thirds of the range are composed of low hills connected by extensive areas of pedimented bedrock where relief is rarely greater than 400 feet. The range is bounded to the north by the Higley basin, and no extensive, pedimented bedrock surfaces exist here. Instead, abrupt thickening of the basin fill is suggested by the numerous earth fissures along the range's north edge (Harris, 1994; Sank, 1975). To the south, like the east, an extensive dissected granitic pediment extends all the way to the Gila river. Extensive pediments in the Sacaton Mountains to the southwest also probably extend northward to the Gila River, suggesting that the low area between the two ranges was created more by erosional processes than by tectonic processes. At Poston Butte, near the eastern terminus of the Santan Mountains, crystalline bedrock occurs less than ISO meters below the Gila River (Hoag, 1996).