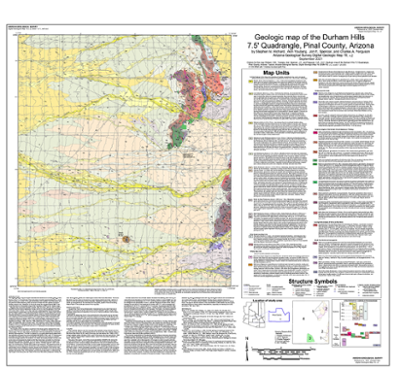 This digital geologic map and report describes the bedrock and surficial geology of the Durham Hills 7 1/2' Quadrangle. The study area is located approximately 60 km north-west of downtown Tucson. It includes the Durham Hills, western Suizo Mountains, and the piedmont areas extending west and south of these hills with sparse outcrops of Tertiary volcanic rock. Elevations in the study range from approximately 3360 ft in the Suizo Mountains on the eastern edge of the map area to 2760 ft on the western edge. Mapping was conducted between October, 2001 and May, 2002 as part of continuing efforts by the Arizona Geological Survey (AZGS) to map the geology of the Phoe-nix-Tucson urban corridor. This map is part of a mapping project that encompasses several adjacent quadrangles including Fortified Peak (DGM 18), Desert Peak (DGM 20), Oro Valley (DGM 21), Chief Butte (DGM 22), North of Oracle (DGM 23), and the Tortolita Mountains including the northern portion of Ruelas Canyon (DGM 26). Bedrock mapping consists almost entirely of new mapping but locally incorporates past mapping by Banks and others (1977). The surficial geologic mapping builds on and complements previous efforts in the Tucson area (e.g. Klawon and others, 1999; Pearthree and Biggs, 1999; Skotnicki, 1999; Pearthree and Youberg, 2000; Skotnicki, 2000, and references cited on those maps). This mapping is part of the STATEMAP Program of the U.S. Geological Survey, administered under contract #01HQAG0098, and jointly supported by the AZGS and the U.S. Geological Survey National Cooperative Mapping Program. The majority of the map area is a piedmont that slopes gently westward-from the Durham Hills and Suizo Mountains. The piedmont is mantled by Quaternary alluvium of varying ages. The two main ridges of the Durham Hills are separated by a northwest-trending high-angle fault. This fault is inferred to cut a gently east-dipping detachment fault exposed southward from about 487000N 3621000E (UTM, zone 12). Rock above and below the detachment fault is crushed for a distance of 20 to 200 cm. Footwall rocks are strongly mylonitic for several to 10 meters structurally beneath the fault, with some rocks so transposed by shearing that they have been converted to a thinly layered gneissic mylonite, with layers 2-10 mm thick. Hanging wall rock is reddish and oxidized, footwall rock is greenish gray and chloritic. The fault dips 40° to 45° to the east. No microbreccia or silicified fault surface was observed. This detachment fault is inferred to bound the east side of the Durham Hills, juxtaposing Tertiary volcanic and sedimentary rocks on foliated to massive granitic rocks exposed in the Durham Hills. These volcanic and sedimentary rocks are inferred to be continuous in the subsurface between the Durham Hills, the Huerfano, and the Suizo Mountains. A NNE-trending high-angle(?) fault along the west base of the Suizo Mountains juxtaposes Tertiary volcanic rock against granitic and metamorphic rocks of the Suizo Mountains. The Suizo Mountains are bounded on the east by an east-dipping detachment fault, which is inferred to continue southwest into the map area, separating mylonitic Pinal Schist intruded by leucogranite on the northwest from low-grade, phyllitic Pinal Schist along Parker Wash in the southeast corner of the map area. Purpose: This new geologic mapping north of Tucson is part of continuing efforts by the AZGS to map the geology of the Phoenix - Tucson urban corridor. This map builds on and complements previous and concurrent surfical geologic mapping efforts in the Tucson area.