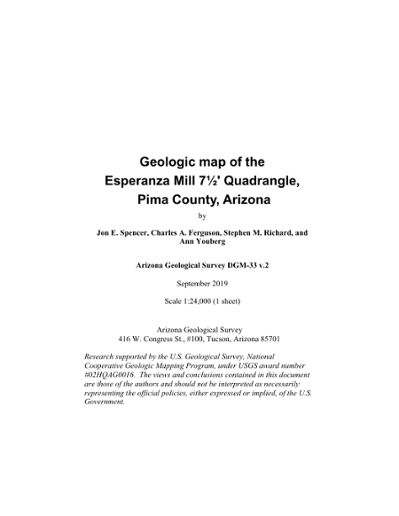 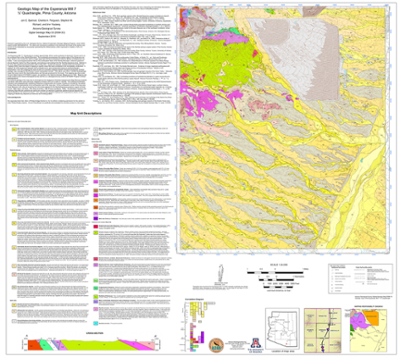 The Esperanza Mill 7 ½' Quadrangle is located approximately 40 km south-southwest of downtown Tucson, and is on the southeast flank of the Sierrita Mountains. The quadrangle encompasses the eastern edge of the Esperanza ore body, which is now mined from within a single large open pit that encompasses both the Sierrita and Esperanza ore bodies. It also encompasses bedrock hills on the southeastern flank of the Sierrita Mountains, extensive piedmont alluvial deposits, Santa Cruz River deposits, and extensive mine tailings from the Sierrita-Esperanza mine. Bedrock in the area was mapped during December 2002 to May 2003. Quaternary deposits, mapped earlier by Pearthree and Youberg (2000), were the target of mapping in specific areas that were considered to be incompletely understood. In addition, all of the Quaternary deposits were evaluated and in part reinterpreted based on aerial photograph interpretation. All of this mapping was done as part of a multiyear mapping program directed at producing complete geologic map coverage for the Phoenix-Tucson metropolitan corridor. This map is one of four 1:24,000 scale geologic maps that cover most of the Sierrita Mountains and that were produced for this study. This mapping was done under the joint State-Federal STATEMAP program, as specified in the National Geologic Mapping Act of 1992. Mapping was jointly funded by the Arizona Geological Survey and the U.S. Geological Survey under STATEMAP Program Contract #02HQAG0016.