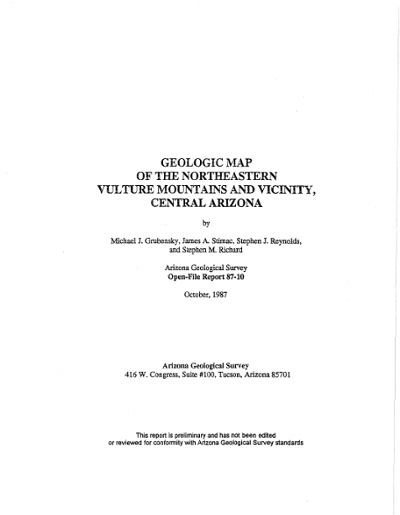 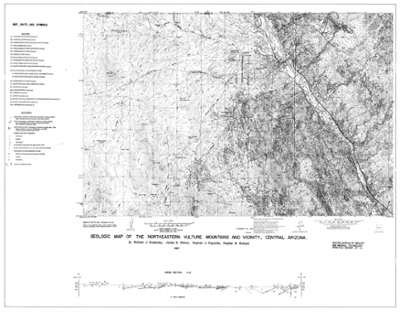 This report presents 1:24,000-scale geologic mapping of the eastern Vulture Mountains and vicinity. This mapping, along with concurrent mapping of the Wickenburg Mountains and western Hieroglyphic Mountains (Stimac and others, 1987). was completed between January and April 1987 and was jointly funded by the u.s. Geological Survey and Arizona Bureau of Geology and Mineral Technology as part of the cost-sharing Cooperative Geologic Mapping Program (COGEOMAP). These areas were mapped because they were previously unmapped in detail, and were suspected to contain a highly faulted and potentially mineralized assemblage of Proterozoic crystalline rocks, Cretaceous granite, and middle Tertiary volcanic and sedimentary rocks. The Vulture Mountains represent an important link between previously studied middle Tertiary rocks and structures in the Big Horn Mountains (Capps and others, 1985; Stimac and others, 1987) and central Vulture Mountains (Rehrig and others, 1980) to the southwest and Hieroglyphic Mountains to the east (Capps and others, 1986). Together, the geologic studies in these mountain ranges provide a transect from the highly distended Basin and Range Province to -the edge of the Transition Zone.