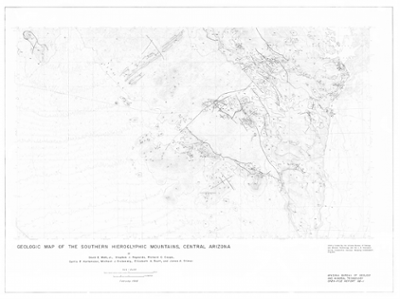 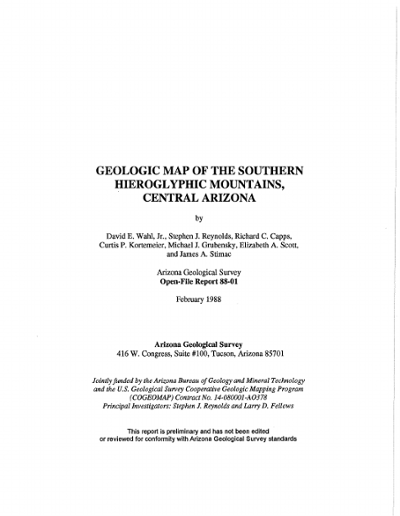 This reconnaissance geologic map covers both the Baldy Mountain and the Hieroglyphic Mountains SW 7.5 minute quadrangles of central Arizona. The geologic mapping was done between January and June, 1986 and November and December, 1987. This mapping was jointly funded by the U. S. Geological Survey and the Arizona Bureau of Geology and Mineral Technology as part of the cost-sharing, Cooperative Geologic Mapping Program (COGEOMAP). The aim of COGEOMAP is to produce high-quality geologic maps for areas that have been inadequately mapped and that have high mineral resource or natural potential. This mapping was done on 1:24,000-scale topographic maps and on 1:24,000-scale color aerial pholographs provided by Raymond A. Brady, U. S. Bureau of Land Management, Phoenix. The reader is referred to a previous report on the northeastern Hieroglyphic Mountains (Capps, R.C., and others, 1986) for a more detailed discussion of the geology of the region. Additional descriptions of the area are contained in Ward (1977). Rock-unit names in this report are from Stimac and others (1987) and Capps and others (1986) as modified from Ward (1977).