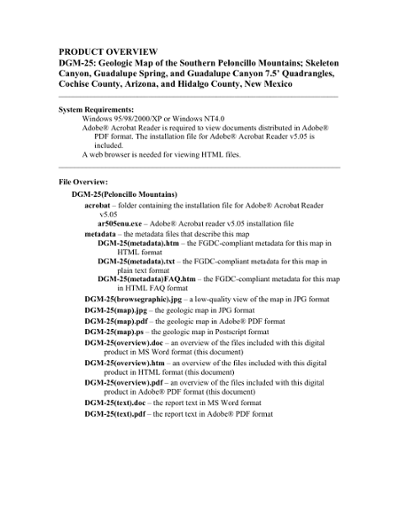 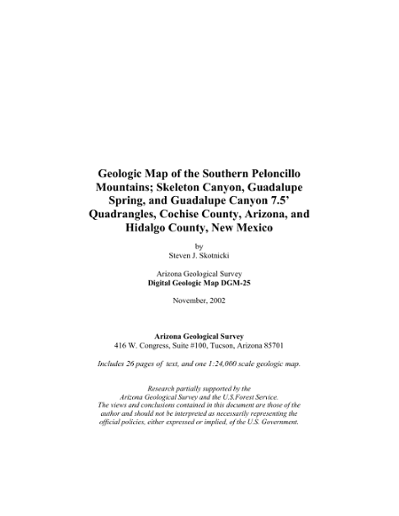 As part of the mid-Tertiary Boot Heel volcanic field, the southern Peloncillo Mountains provide a wonderful opportunity to study to Oligocene cauldron structures, intracaldera and extracaldera ignimbrites, and caldera-fill meso- and megabreccias. The Peloncillo Mountains proper straddles the Arizona-New Mexico Border and defines a long, narrow strip from the Mexican border to well north of Steins. The area focussed on in this report is between the Mexican border on the south and about two miles north of Skeleton Canyon in the north. The range contains five regional ignimbrites that span the transition from low-angle Laramide-related subduction to transform faulting in the southwestern North American Cordillera. Earlier detailed work by Elston (1976), Deal and others (1978), and Erb (1979), among others, has recently been revised using highprecision 40Ar/39Ar geochronology (McIntosh and Byron, 2000). Combined with recent mapping this has allowed for the creation of a detailed time-stratigraphic section for the southern Peloncillo Mountains. The eruption of the ignimbrites and associated post-caldera lava flows waned after about 27 Ma, and was followed much later, by voluminous basaltic volcanism between about 9 and 5 Ma. These basalts were erupted onto a deep erosional unconformity of considerable relief. These “older basalts” filled paleotopography in some places to over 300 meters thick. Basin-and-Range faulting has subsequently downdropped the San Bernardino Valley on the west, leaving the older basalts as high-standing dissected ridges flanking the west side of the range. Although at least one minor fault offsets the basalt, its age is unclear and it is uncertain how these basalts relate exactly to the onset of Basin-and-Range extension in the area.