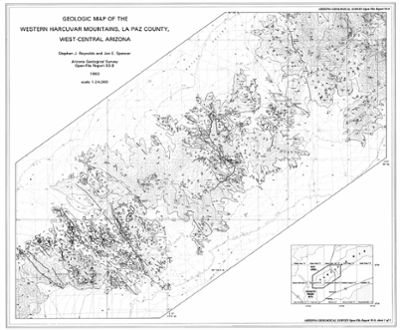 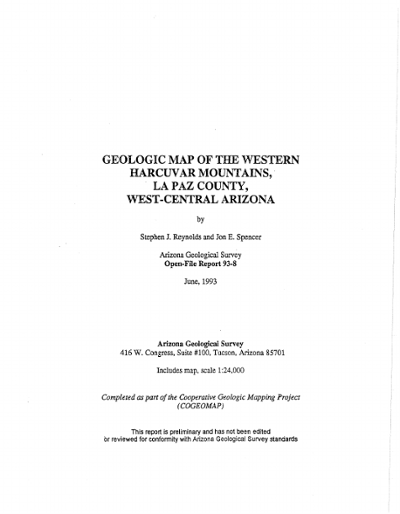 The western Harcuvar Mountains are a fairly rugged~ fairly inaccessible range located north and northwest of Salome in west-central Arizona. The area was mapped in a detailed reconnaissance manner on a 1:24,000-scale topographic base, with the initial intention of releasing the mapping on the Salome 1:100,000 quadrangle. As we proceeded with the mapping, however, we made some exciting new, and unexpected, discoveries. As a result, we decided to compile and release the mapping at 1:24,000, even though we have not covered the entire map area at a level of detail commensurate with that scale. The mapping represents approximately 30 person-days spent in the field between 1984 and 1991. In this report, we present the results of our mapping and reconnaissance structural studies. Some of the foliation attitudes in the northeastern part of the map area were measured by Robert Scott. Some aspects of the geology of the area have been discussed elsewhere (Bancroft, 1911; Tovote, 1918; Keith, 1978; Rehrig and Reynolds, 1980; Coney and Reynolds, 1980; Reynolds, 1980, 1982; Reynolds and others, 1986, 1988, 1989, 1991; Spencer and Reynolds, 1989; Spencer and Welty, 1989; Drewes and others, 1990; Reynolds and Lister, 1990).