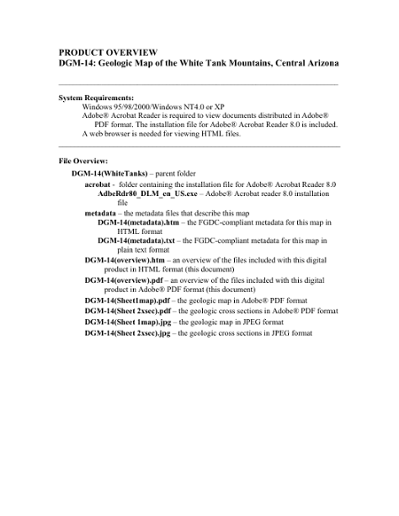 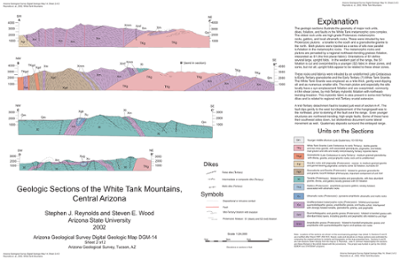 The White Tank Mountains are a mid-Tertiary metamorphic core complex located 65 kilometers west of Phoenix. Bedrock is composed of Proterozoic metamorphic and plutonic rocks, two late Cretaceous to early Tertiary plutons, and less abundant mid-Tertiary plutonic, volcanic, and sedimentary rocks. The range is surrounded by Quaternary deposits and surfaces that range in age from Recent to Early Pleistocene. The oldest rocks are Early Proterozoic metamorphic rocks, consisting of banded gneiss and biotite schist (Xm), amphibolite (Xmm), and a pod of ultramafic rocks (Xu) and gabbro (Xug). These rocks are intruded by two foliated Proterozoic plutons, a tonalite (Xt) to the south and a granodiorite-granite (Xgd) to the north. The northern part of the range exposes a quartzofeldspathic gneiss (Xmf), in part composed of thin sills of pegmatite and granite probably related to the granodiorite-granite pluton. In the south, the tonalite invades the metamorphic rocks as sheetlike intrusions concordant to foliation in both rock types and locally takes on a gneissic appearance. Several generations of Proterozoic metamorphic fabric are documented, including a main northeast-trending, high-grade gneissic foliation (S1). This fabric is present in both Proterozoic plutons and is folded and overprinted by a later sillimanite-grade Proterozoic mylonitic fabric (S2) that is concentrated in an east-dipping, normal shear zone (Reynolds and DeWitt, 1991; Alter, 1994; Wood, 1998). Two distinct plutons of probable Late Cretaceous to early Tertiary age intrude the Proterozoic rocks. To the northwest is an undeformed, medium-grained granodiorite with locally associated dioritic and granitic phases. The eastern flank of the range is composed of the light-colored White Tank Granite, which forms a large silllike pluton and numerous smaller sills in the metamorphic rocks and tonalite. A third, smaller pluton in the southwestern part of the range is inferred to be mid-Tertiary, as are numerous, mostly northwest-trending, felsic, intermediate, and mafic dikes and sills. Tilted mid-Tertiary volcanic and sedimentary rocks are preserved above a brittle detachment fault along the western edge of the range. Mid-Tertiary mylonitic fabrics, with a characteristic northeast-southwest-trending, streaky lineation are locally present in the Proterozoic rocks, White Tank Granite, and some mid-Tertiary dikes and sills. These fabrics are inferred to have formed as the White Tanks core complex, which is in the lower plate of the detachment fault, was brought to the surface from underneath the Union Hills to the northeast (Rehrig and Reynolds, 1980; Brittingham, 1985; Reynolds and Dewitt, 1991; Reynolds and Lister, 1987; Kruger and others, 1998). Younger, northwest-trending, high-angle faults, with some lateral displacement, cut across the range. Quaternary alluvium around the range is divided into older, middle, and younger deposits and surfaces that document a complex history of erosion and aggradation. Younger deposits are lower in elevation, are less dissected by erosion, and have less developed caliche, desert varnish, and desert pavement than higher, older Quaternary deposits (Field and Pearthree, 1991).