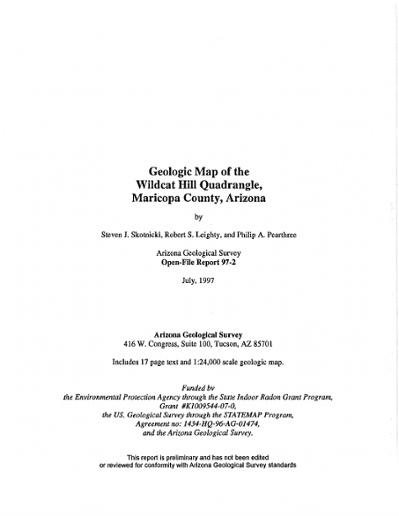 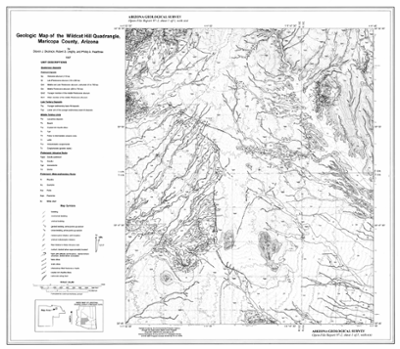 The Wildcat Hill quadrangle is centered about six miles directly east of the town of Carefree, Arizona on the northeastern fringe of the Phoenix metropolitan area (Figure 1). Most of the central and western portions of the quadrangle are within the corporate boundaries of the City of Scottsdale. In the east the region includes the upper reaches of Camp Creek and the lower-crustal xenolith-bearing latite lavas of Blue Mountain. Topographic relief is low through most of the map area, with a few hills rising above a broad pediment formed on granitic rocks. The map that accompanies this report characterizes the bedrock and surficial geology of the Wildcat Hill quadrangle, and this report summarizes the geology and geologic hazards of the quadrangle. Mapping of bedrock in the quadrangle was based primarily on extensive field investigations. Surficial geologic mapping was based both on field observations and interpretation of black-and-white, 1:48,000-scale aerial photographs (dated 9-17-92) and color, 1:24,000-scale aerial photographs (dated 6-11-88) obtained from the Tonto National Forest. This study is contiguous with geologic mapping recently completed to the south (Skotnicki, 1996a), east (Skotnicki, 1996b), and west (Leighty and others,1997). This project was funded by the Environmental Protection Agency through the State Indoor Radon Grant Program, Grant #KI009544-07-0, the U.S. Geological Survey through the STATEMAP Program, Grant #, and the Arizona Geological Survey.