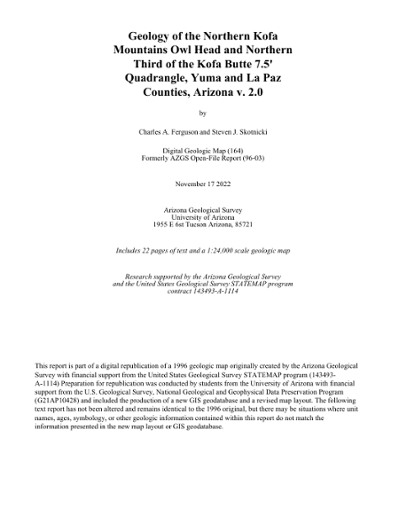 The Owl Head 7.5' quadrangle and the northern third of its southern neighbor, the Kofa Butte 7.5' quadrangle, represent an 80 mile' area of the northern Kofa Mountains, a remote, rugged range of southwest Arizona (Figure 1). The only part of the map area covered by significant amounts of Quaternary alluvium is an 8 mile' area in the northwest corner which is part of a narrow, Quaternary or younger Tertiary alluvial-filled valley that separates the Kofa Mountains from the New Water and Plomosa mountains to the north. Most of the bedrock exposures are Miocence calc-alkaline volcanic rocks of the Kofa volcanic field. They occur in three sequences: a series of outflow sheets of ash-flow tuffs that depositionally overly the crystalline basement rocks, a middle sequence of mafic to intermediate lava flows, and a younger sequence of basalt lavas. The crystalline basement rocks are exposed in the footwall of two major south-side-down normal faults which transect the north-central part of the map area. The basement consists primarily of Mesozoic(?) granitoids which intrude amphibolite-facies, Proterozoic(?), sedimentary rocks to the east. To the west, the granitoid has an indeterminate east-northeast striking contact with low-metamorphic grade argillites of probable Late Mesozoic age which underlie the northwestern peidmont of the Kofa Mountains, and which are probably correlative to extensive areas of similar rocks which make up large areas of the Plomosa Range to the north (Richard and others, 1993).