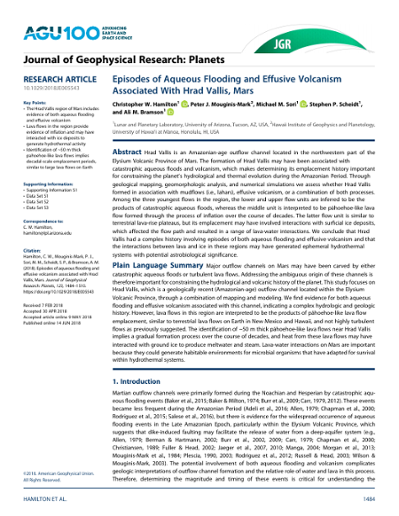 Hrad Vallis is an Amazonian-age outflow channel located in the northwestern part of the Elysium Volcanic Province of Mars. The formation of Hrad Vallis may have been associated with catastrophic aqueous floods and volcanism, which makes determining its emplacement history important for constraining the planet's hydrological and thermal evolution during the Amazonian Period. Through geological mapping, geomorphologic analysis, and numerical simulations we assess whether Hrad Vallis formed in association with mudflows (i.e., lahars), effusive volcanism, or a combination of both processes. Among the three youngest flows in the region, the lower and upper flow units are inferred to be the products of catastrophic aqueous floods, whereas the middle unit is interpreted to be phoehoe-like lava flow formed through the process of inflation over the course of decades. The latter flow unit is similar to terrestrial lava-rise plateaus, but its emplacement may have involved interactions with surficial ice deposits, which affected the flow path and resulted in a range of lava-water interactions. We conclude that Hrad Vallis had a complex history involving episodes of both aqueous flooding and effusive volcanism and that the interactions between lava and ice in these regions may have generated ephemeral hydrothermal systems with potential astrobiological significance. Plain Language Summary Major outflow channels on Mars may have been carved by either catastrophic aqueous floods or turbulent lava flows. Addressing the ambiguous origin of these channels is therefore important for constraining the hydrological and volcanic history of the planet. This study focuses on Hrad Vallis, which is a geologically recent (Amazonian-age) outflow channel located within the Elysium Volcanic Province, through a combination of mapping and modeling. We find evidence for both aqueous flooding and effusive volcanism associated with this channel, indicating a complex hydrologic and geologic history. However, lava flows in this region are interpreted to be the products of phoehoe-like lava flow emplacement, similar to terrestrial lava flows on Earth in New Mexico and Hawaii, and not highly turbulent flows as previously suggested. The identification of similar to 50m thick phoehoe-like lava flows near Hrad Vallis implies a gradual formation process over the course of decades, and heat from these lava flows may have interacted with ground ice to produce meltwater and steam. Lava-water interactions on Mars are important because they could generate habitable environments for microbial organisms that have adapted for survival within hydrothermal systems.