What Does Diachrony Say About English Tough-Constructions? 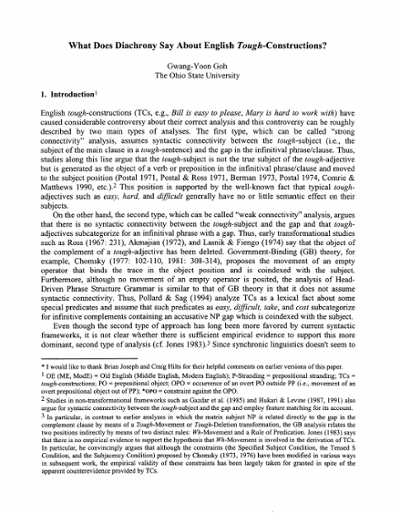 Goh, Gwang-Yoon. "What Does Diachrony Say About English Tough-Constructions?" Papers from the Poster Session of the 18th Annual West Coast Conference on Formal Linguistics (WCCFL 18), 2000, pp. 47-54.

Published as a special volume of the Coyote Papers: The University of Arizona Working Papers in Linguistics.

Introduction (1) English tough-constructions (TCs, e.g., Bill is easy to please, Mary is hard to work with) have caused considerable controversy about their correct analysis and this controversy can be roughly described by two main types of analyses. The first type, which can be called "strong connectivity" analysis, assumes syntactic connectivity between the tough-subject (i.e., the subject of the main clause in a tough-sentence) and the gap in the infinitival phrase/clause. Thus, studies along this line argue that the tough-subject is not the true subject of the tough-adjective but is generated as the object of a verb or preposition in the infinitival phrase/clause and moved to the subject position (Postal 1971, Postal & Ross 1971, Berman 1973, Postal 1974, Comrie & Matthews 1990, etc.)(2). This position is supported by the well-known fact that typical toughadjectives such as easy, hard, and difficult generally have no or little semantic effect on their subjects. On the other hand, the second type, which can be called "weak connectivity" analysis, argues that there is no syntactic connectivity between the tough-subject and the gap and that toughadjectives subcategorize for an infinitival phrase with a gap. Thus, early transformational studies such as Ross (1967: 231), Akmajian (1972), and Lasnik & Fiengo (1974) say that the object of the complement of a tough-adjective has been deleted. Government-Binding (GB) theory, for example, Chomsky (1977: 102-110, 1981: 308-314), proposes the movement of an empty operator that binds the trace in the object position and is coindexed with the subject. Furthermore, although no movement of an empty operator is posited, the analysis of HeadDriven Phrase Structure Grammar is similar to that of GB theory in that it does not assume syntactic connectivity. Thus, Pollard & Sag (1994) analyze TCs as a lexical fact about some special predicates and assume that such predicates as easy, difficult, take, and cost subcategorize for infinitive complements containing an accusative NP gap which is coindexed with the subject. Even though the second type of approach has long been more favored by current syntactic frameworks, it is not clear whether there is sufficient empirical evidence to support this more dominant, second type of analysis ( cf. Jones 1983 )(3). Since synchronic linguistics doesn't seem to be able to resolve this controversy one way or the other, what then does the diachrony of the relevant parts of English grammar say about the analysis of TCs? Does diachrony argue for any particular position?