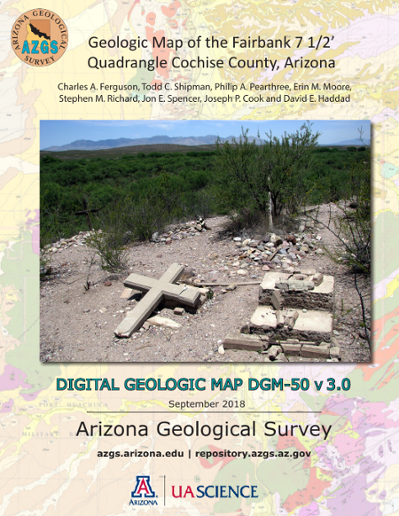 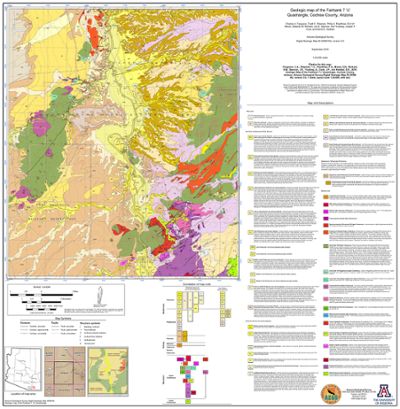 The Fairbank map area is dominated by an Upper Cretaceous plutonic-volcanic complex that is closely associated with silver-rich, porphyry ore deposits of the Tombstone district (Goodale, 1927; Butler et al., 1938; Newell, 1974; Devere, 1978; Williams, 1980) located directly east of the map area. The volcanic rocks overlie Lower Cretaceous siliciclastic strata of the Bisbee Group with angular unconformity. The older rocks were folded into northwest-striking folds that show evidence for two phases of deformation. The Upper Cretaceous volcanics are moderately to gently tilted to the northwest forming two low-lying, southwest-striking horst blocks. A fairly major southeast-side-down normal fault, of probable middle Cenozoic age, is interpreted to cross the San Pedro valley diagonally from northeast to southwest just to the southeast of the northwestern horst block. A panel of volcaniclastic conglomerate of probable middle Cenozoic age is barely preserved overlying the volcanics along the northwestern flank of the northwestern horst block just to the north of this map area (Shipman and Ferguson, 2005). A small outcrop of similar conglomerate is tentatively identified overlapping the southeastern horst block. Another strip of conglomerate occurs parallel to and along the crest of the northwestern horst block, but this conglomerate dips steeply to the southeast and is bounded by a gently northwest-dipping normal fault. The age relationship between the two oppositely dipping conglomerate sequences and faults is unknown.