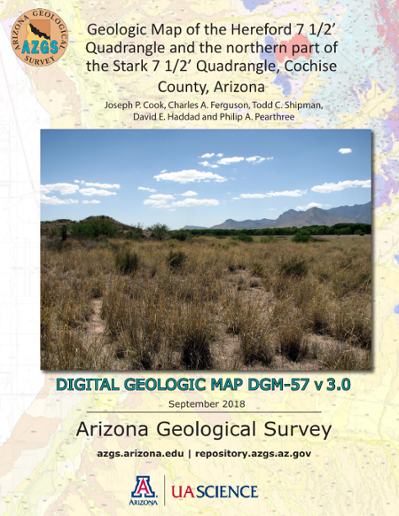 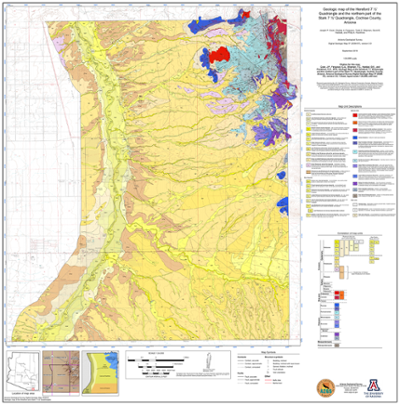 This map depicts the geology of the Hereford and the northern part of the Stark 7 ½' quadrangles, which are located in the upper San Pedro Valley north of the U.S. - Mexico border. The quadrangles cover much of the piedmont east of the San Pedro River and southwest of Mule Mountains, including a portion of the San Pedro Riparian National Conservation Area along the river. The map also covers a small portion of the piedmont west of the San Pedro River. The geology of the quadrangle is diverse and includes Paleozoic sedimentary and igneous rocks, exposures of the upper part of the late Cenozoic basin-filling deposits, and Quaternary surficial alluvium deposited by tributary streams and the San Pedro River. Bedrock geologic mapping was compiled from Ferguson and Johnson (2006). This map is one of several 1:24,000-scale geologic maps that have been completed recently in the upper San Pedro Valley. Other maps cover the Lewis Springs (Pearthree et al., 2006), Fairbank (Ferguson et al, 2006), Land (Shipman and Ferguson, 2005), St. David (Youberg, 2005), Huachuca City (Pearthree, 2003), McGrew Spring (Shipman and Ferguson, 2003), and Benson (Youberg et al, 2004) quadrangles. This mapping was completed under the joint State-Federal STATEMAP program, as specified in the National Geologic Mapping Act of 1992. . Revised and re-released with funding from the USGS National Geological and Geophysical Data Preservation Program, award no. G17AP00114. The views and conclusions contained in this document are those of the authors and should not be interpreted as necessarily representing the official policies, either expressed or implied, of the U.S. Government.