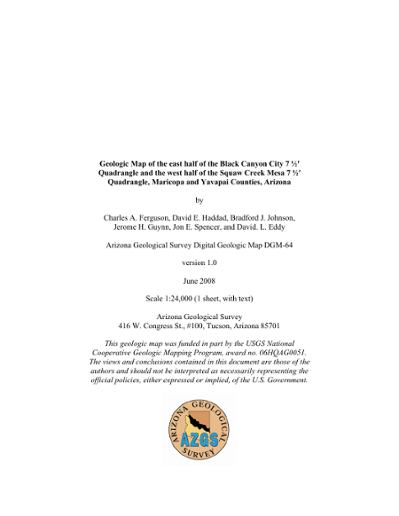 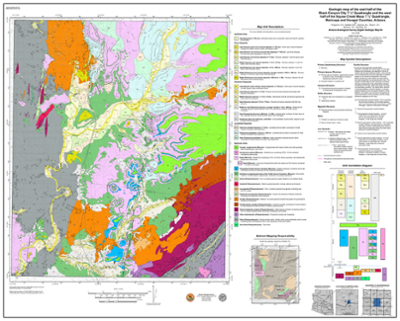 The eastern Black Canyon City 7 ½' Quadrangle and the western Squaw Creek Mesa 7 ½' Quadrangle includes the Interstate 17 corridor where it passes through Black Canyon City and Rock Springs and continues north up the steep grade on the southwest slope of Black Mesa (Figure 1). The distribution of surfaces of different ages and sources in the Black Canyon City quadrangle is associated with the Agua Fria River and Quaternary landslides in the southern and northern halves of the quadrangle, respectively. The southern half of the quadrangle is dominated by the incised Agua Fria River and its tributaries (Little Squaw Creek and Moore Gulch). The Agua Fria River has incised up to 60 m into Paleoproterozoic bedrock (Xs) in the 11 southwestern quarter of the quadrangle. The Little Squaw Creek and Moore Gulch have incised up to 20 m into Chalk Canyon Formation (Tc, Tcl, Tcs) in the southern half of the quadrangle. The northern half of the quadrangle is dominated by Quaternary landslides (Figure 2, 3) ranging from relatively fresh Holocene landslides (Qylsd) to degraded Pleistocene landslides (Qlso). Several older landslide deposits contain younger landslides, indicating that younger mass-wasting events have occurred on older landslide deposits.