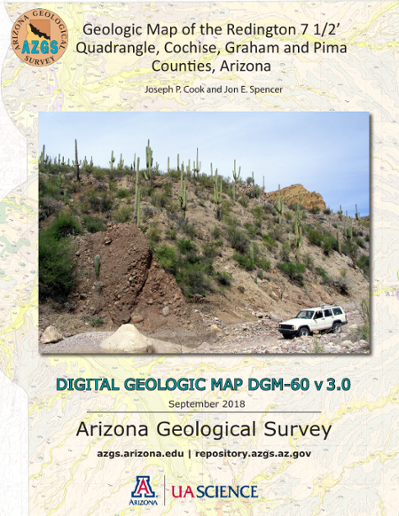 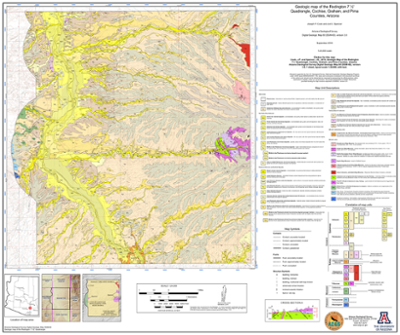 The Redington 7 ½' Quadrangle includes part of the northern San Pedro River and flanking valley fill, as well as two areas of bedrock on the east side of the valley (Figure 1). Production of this new geologic map continues the Arizona Geological Survey mapping program in the San Pedro River valley, and complements geologic mapping to the south of this quadrangle. The map area is located within the San Pedro River valley in the Basin and Range Province of southeastern Arizona. Oligocene to early Miocene, compositionally diverse volcanism in the Galiuro Mountains to the east of the map area occurred during the initiation of a period of severe tectonic extension that uncovered the Catalina-Rincon metamorphic core complex to the southwest (Dickinson and Shafiqullah, 1989; Dickinson, 1991). The San Pedro Valley was created in its basic form by this period of extensional faulting, which largely ended in the early to middle Miocene. Relative to this period of severe faulting, minor faulting affected the valley during late Miocene to Quaternary time, probably with declining activity over this time period. Laramide (latest Cretaceous to earliest Tertiary), steeply southwest dipping to locally overturned volcanic and sedimentary rocks are exposed over part of Redfield Canyon. These are overlain by gently dipping Oligocene to early Miocene Galiuro Volcanics. Tilting of the Laramide strata is thought to be Laramide, not middle Tertiary, because Galiuro Volcanics participated in the middle Tertiary extensional faulting in those areas where faulting occurred, and the Galiuro Volcanics that overlie the Laramide strata are only slightly tilted (Dickinson, 1991).

Revised and re-released with funding from the USGS National Geological and Geophysical Data Preservation Program, award no. G17AP00114. The views and conclusions contained in this document are those of the authors and should not be interpreted as necessarily representing the official policies, either expressed or implied, of the U.S. Government.