Worth Less?: Why Men (and Women) Devalue Care-Oriented Careers 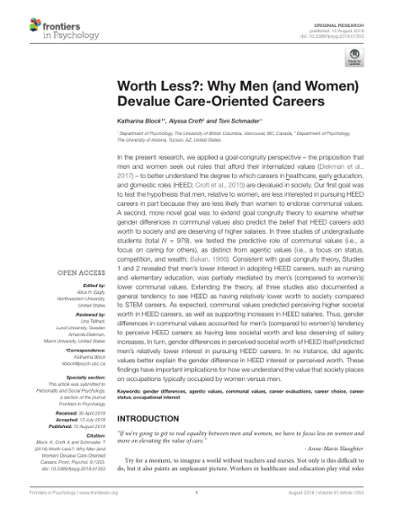 © 2018 Block, Croft and Schmader. This is an open-access article distributed under the terms of the Creative Commons Attribution License (CC BY).

In the present research, we applied a goal-congruity perspective - the proposition that men and women seek out roles that afford their internalized values (Diekman et al., 2017) - to better understand the degree to which careers in healthcare, early education, and domestic roles (HEED; Croft et al., 2015) are devalued in society. Our first goal was to test the hypothesis that men, relative to women, are less interested in pursuing HEED careers in part because they are less likely than women to endorse communal values. A second, more novel goal was to extend goal congruity theory to examine whether gender differences in communal values also predict the belief that HEED careers add worth to society and are deserving of higher salaries. In three studies of undergraduate students (total N = 979), we tested the predictive role of communal values (i.e., a focus on caring for others), as distinct from agentic values (i.e., a focus on status, competition, and wealth; Bakan, 1966). Consistent with goal congruity theory, Studies 1 and 2 revealed that men's lower interest in adopting HEED careers, such as nursing and elementary education, was partially mediated by men's (compared to women's) lower communal values. Extending the theory, all three studies also documented a general tendency to see HEED as having relatively lower worth to society compared to STEM careers. As expected, communal values predicted perceiving higher societal worth in HEED careers, as well as supporting increases in HEED salaries. Thus, gender differences in communal values accounted for men's (compared to women's) tendency to perceive HEED careers as having less societal worth and less deserving of salary increases. In turn, gender differences in perceived societal worth of HEED itself predicted men's relatively lower interest in pursuing HEED careers. In no instance, did agentic values better explain the gender difference in HEED interest or perceived worth. These findings have important implications for how we understand the value that society places on occupations typically occupied by women versus men.