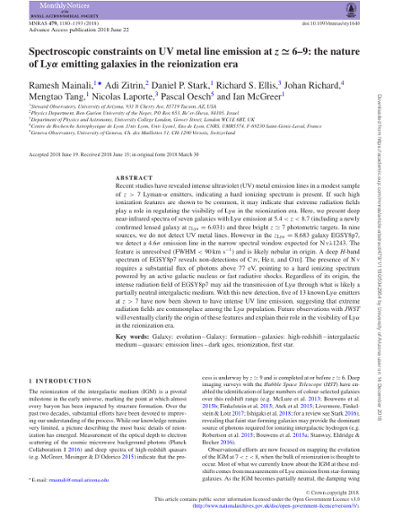 Recent studies have revealed intense ultraviolet (UV) metal emission lines in a modest sample of z > 7 Lyman-alpha emitters, indicating a hard ionizing spectrum is present. If such high ionization features are shown to he common, it may indicate that extreme radiation fields play a role in regulating the visibility of Ly alpha in the reionization era. Here, we present deep near-infrared spectra of seven galaxies with Ly alpha, emission at 5.4 < z < 8.7 (including a newly confirmed lensed galaxy at z(Ly alpha) = 6.031) and three bright z similar or equal to 7 photometric targets. In nine sources, we do not detect UV metal lines. However in the z(Ly alpha) = 8.683 galaxy IEGSY8p7, we detect a 4.6 sigma emission line in the narrow spectral window expected for N v lambda 1243. The feature is unresolved (FWHM < 90 km s(-1)) and is likely nebular in origin. A deep H-band spectrum of FGSY8p7 reveals non-detections of C IV, He II, and O III], The presence of N v requires a substantial flux of photons above 77 eV, pointing to a hard ionizing spectrum powered by an active galactic nucleus or fast radiative shocks. Regardless of its origin, the intense radiation field of EGSY8p7 may aid the transmission of Ly alpha through what is likely a partially neutral intergalactic medium. With this new detection, live of 13 known Ly alpha emitters at z > 7 have now been shown to have intense UV line emission, suggesting that extreme radiation fields are commonplace among the Ly alpha population. Future observations with JWST will eventually clarify the origin of these features and explain their role in the visibility of Ly alpha, in the reionization era.