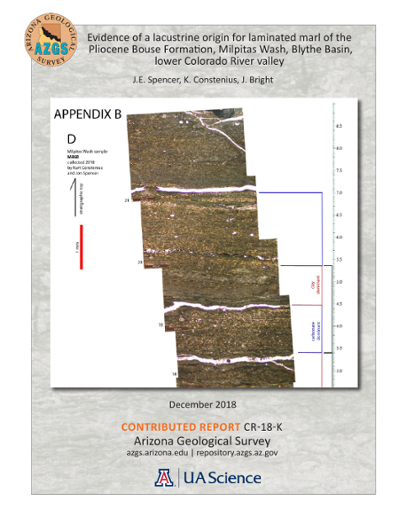 The Pliocene Bouse Formation in the lower Colorado River trough locally contains laminated marl and claystone interpreted by O’Connell et al. (2017) to represent the spring-neap tide cycle during sediment deposition in an estuary. Tidal cycles, if present, should be detectable by Fourier spectral analysis of lamination thicknesses in continuous sequences of laminated sediments. To evaluate the tidal interpretation, we attempted to photograph several laminated sequences in the southern Bouse Formation (south of Blythe, California) so that thicknesses could be measured from the photographs. Only one sequence, in lower Milpitas Wash (California), was identified where thicknesses could be determined with adequate precision from field photography. Fourier analysis of that sequence failed to identify evidence of tides. Furthermore, electron-microprobe analysis determined that laminations consist of alternating claystone and marl, which is consistent with annual changes in lake chemistry and sediment sources rather than physical changes in sediment sorting and transport during tidal cycles. Fourier analysis of data presented by O’Connell et al. (2017) of two nearby laminated Bouse sequences interpreted as tidal rhythmites also failed to identify statistically significant evidence of tides.