Global Aurora on Mars During the September 2017 Space Weather Event 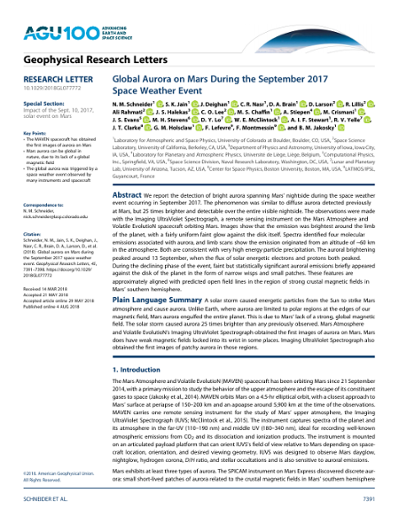 We report the detection of bright aurora spanning Mars' nightside during the space weather event occurring in September 2017. The phenomenon was similar to diffuse aurora detected previously at Mars, but 25 times brighter and detectable over the entire visible nightside. The observations were made with the Imaging UltraViolet Spectrograph, a remote sensing instrument on the Mars Atmosphere and Volatile EvolutioN spacecraft orbiting Mars. Images show that the emission was brightest around the limb of the planet, with a fairly uniform faint glow against the disk itself. Spectra identified four molecular emissions associated with aurora, and limb scans show the emission originated from an altitude of similar to 60 km in the atmosphere. Both are consistent with very high energy particle precipitation. The auroral brightening peaked around 13 September, when the flux of solar energetic electrons and protons both peaked. During the declining phase of the event, faint but statistically significant auroral emissions briefly appeared against the disk of the planet in the form of narrow wisps and small patches. These features are approximately aligned with predicted open field lines in the region of strong crustal magnetic fields in Mars' southern hemisphere. Plain Language Summary A solar storm caused energetic particles from the Sun to strike Mars atmosphere and cause aurora. Unlike Earth, where aurora are limited to polar regions at the edges of our magnetic field, Mars aurora engulfed the entire planet. This is due to Mars' lack of a strong, global magnetic field. The solar storm caused aurora 25 times brighter than any previously observed. Mars Atmosphere and Volatile EvolutioN's Imaging UltraViolet Spectrograph obtained the first images of aurora on Mars. Mars does have weak magnetic fields locked into its wrist in some places. Imaging UltraViolet Spectrograph also obtained the first images of patchy aurora in those regions.