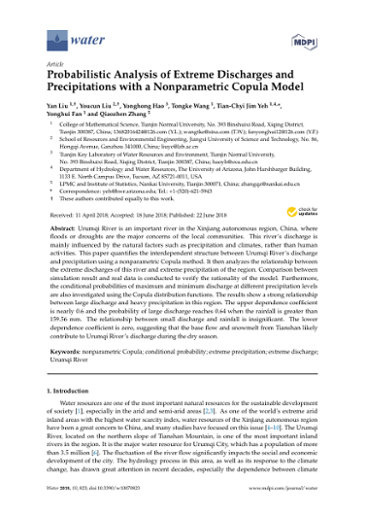 © 2018 by the authors. Licensee MDPI, Basel, Switzerland. This article is an open access article distributed under the terms and conditions of the Creative Commons Attribution (CC BY) license.

Urumqi River is an important river in the Xinjiang autonomous region, China, where floods or droughts are the major concerns of the local communities. This river's discharge is mainly influenced by the natural factors such as precipitation and climates, rather than human activities. This paper quantifies the interdependent structure between Urumqi River's discharge and precipitation using a nonparametric Copula method. It then analyzes the relationship between the extreme discharges of this river and extreme precipitation of the region. Comparison between simulation result and real data is conducted to verify the rationality of the model. Furthermore, the conditional probabilities of maximum and minimum discharge at different precipitation levels are also investigated using the Copula distribution functions. The results show a strong relationship between large discharge and heavy precipitation in this region. The upper dependence coefficient is nearly 0.6 and the probability of large discharge reaches 0.64 when the rainfall is greater than 159.56 mm. The relationship between small discharge and rainfall is insignificant. The lower dependence coefficient is zero, suggesting that the base flow and snowmelt from Tianshan likely contribute to Urumqi River's discharge during the dry season.