Rhetorics of the Fantastic: Re-Examining Fantasy as Action, Object, and Experience 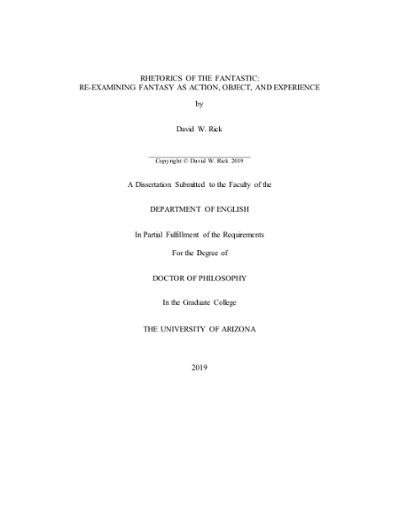 Establishing the literary genre of fantasy, as it is currently known, is largely credited to J. R. R. Tolkien in the mid-twentieth century, though in a broader sense fantastical storytelling has existed for as long as humans have been telling stories. Since its rise to popularity as a contemporary genre, many scholars have studied fantasy in various dimensions, but such study has tended to emphasize genre taxonomy, remaining otherwise generally limited in scope and narrow in focus. This dissertation seeks to complicate an understanding of the term “fantasy,” particularly as it differs from commodified, market-driven genre conventions. It argues that the fantastic represents departure, transformation, and alternative modes of thinking. The project examines major writings on fantasy and the fantastic, including works by writers such as Tzvetan Todorov, Farah Mendlesohn, Ursula K. Le Guin, and Tolkien. It also examines how the fantastic manifests in works not usually thought of as fantasy, as in the writings of Gloria Anzaldúa, and draws upon rhetorical thinkers, such as Wayne Booth and William Covino, while borrowing Kenneth Burke’s dramatistic pentad as a central device to establish a “fantastical pentad.” Part One of this dissertation examines three major capacities of this fantastical pentad: action, object, and experience. As action, the fantastic has the power to complicate, to reimagine—what Tolkien called “sub-creation” and what Paulo Freire called “re-creation.” This produces a fantastical object, or fantasy, that embodies the transformative power of the fantastical act, allowing others to experience it. In turn, experiencing a transformative fantasy offers the opportunity for questioning, evaluating what that fantasy is, how it may or may not be plausible within one’s worldview, and to understand why it is fantastical—that is, what it seeks to transform. Part Two applies these ideas to three sites of inquiry: the composition classroom, games and play, and popular fiction. The project concludes that the fantastic offers, as its primary function, not escapism or mere “flight of fancy,” as has often been claimed in the past, but transformation. This transformation may work in many ways: it may be transformative for the fantasist, who enacts the fantastic; it can be transformative for the audience, who experience the fantasy that the fantasist creates; or, it can be transformative within the object, itself, by reimagining some convention within the writing. This compositional transformation may be a narrative element of fiction such as in the works of Le Guin, where the fantasy is transformative within its genre, or in the writing of Anzaldúa, which blend the fantastic with non-fiction for very material, real-world purposes. This illustrates a cultural significance that reaches far beyond the realm of idle entertainment, providing inspiration and impetus to enact change in the material world.