Neisseria gonorrhoeae Survival in the Host 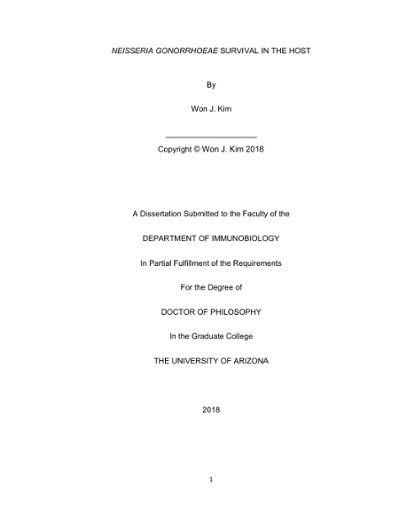 A Gram-negative human pathogen Neisseria gonorrhoeae (Ngo), which causes sexually transmitted disease gonorrhea, infects hundreds of millions of people each year. Gonorrhea patients experience symptoms of dysuria and inflammation, and in serious cases suffer from infertility, pelvic inflammatory disease, and blindness. Gonorrhea is rapidly becoming an untreatable disease, because Ngo has gained resistance to virtually all antibiotics used for its treatment. Ngo infects human mucosal epithelial cells. Ngo quickly attaches to these cells, and remains cell associated for prolonged periods without causing damage. Ngo also invades the host cells, and the intracellular stage is an integral component of its life cycle. In this dissertation, I investigated processes that affect the survival of Ngo both at the surface and inside of epithelial cells. I determined how Ngo is affected by 1) commensal species of Neisseria that also colonize the human epithelium and 2) autophagy, a host defense mechanism that functions to eliminate intracellular pathogens. I demonstrate that Ngo is killed by commensal Neisseria, which also colonize human mucosal epithelium. The killing occurs when Ngo takes up DNA from commensal species of Neisseria that contain methylation pattern different from its own. Consistent with these in vitro results, commensal Neisseria elongata accelerates the clearance of wt Ngo, but not a DNA uptake mutant, from the vaginal tract in a mouse model of infection. I also show that infected epithelial cells mount an autophagic response against intracellular Ngo. I present experimental evidence that this response is mediated by a ubiquitous Type I membrane protein CD46-cyt1 and its interacting partner GOPC. Autophagy kills intracellular Ngo early in infection. However, I also present data suggesting that Ngo interferes with autophagy during the course of its prolonged infection. Ngo, at the host cell surface, gradually degrades two key autophagic components, CD46-cyt1 and LAMP1, to ensure the survival of late invaders. Thus, I elucidated two distinct mechanisms that affect the survival of Ngo. Individually, each of these mechanisms may have implications in other human pathogens survive in our body. Data presented here indicate that Ngo’s susceptibility to commensal Neisseria depends on its genetic competence and extensive DNA methylation. This raises a question whether naturally competent pathogens that heavily methylate their DNA, including Neisseria meningitidis, Haemophilus influenza, and Helicobacter pylori, are also affected by a similar process. Further, several other human pathogens (4 viruses, Neisseria meningitidis and Streptococcus pyogenes) also interact with CD46. Thus, my work provides the rationale for investigating whether these pathogens also employ a similar process to evade autophagic killing. Collectively, the results shown here also have therapeutic implications. Modulation of Ngo survival mechanisms outlined here may enable new treatment strategies for gonorrhea, a disease that is rapidly becoming untreatable by antibiotics.