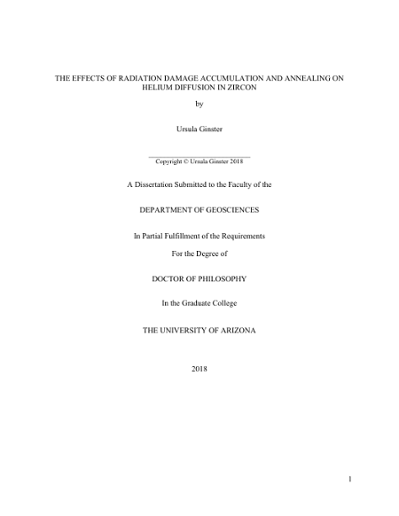 Accurate diffusion models are essential for interpreting thermal histories from noble-gas thermochronology and the timing and rates of near-surface geological processes that come from them. These models use kinetic descriptions of noble gas daughter loss to predict radioisotopic dates for minerals based on parent nuclide abundances (e.g., effective uranium concentration (eU)) and time-temperature (t-T) paths. By matching predicted date-eU correlations with observed ones, the models constrain potential t-T paths for rocks, thereby, elucidating exhumation and burial histories. For some thermochronometers, including the (U-Th)/He system in apatite and zircon, diffusive daughter loss depends not only on temperature but also radiation damage (α-damage and fission tracks), which is imparted by the same radioactive decay that produces the daughter nuclides. Accordingly, the models require a robust understanding of the effects of radiation damage on noble gas diffusion as a function of both damage accumulation and annealing, as well as the kinetics of damage annealing. The current predominant model used for the zircon (U-Th)/He system is the zircon radiation damage accumulation and annealing model (ZRDAAM), which is calibrated from He diffusion data for natural unannealed zircon samples. The model relies on several untested assumptions: (1) He migrates through zircon by thermally activated volume diffusion, (2) radiation damage anneals with the same kinetics as etchable fission tracks, (3) damage annealing reverses the effects of damage accumulation on He diffusion in zircon, and (4) the diffusivity-damage relationship is the same for both damage accumulation and annealing. This dissertation comprises several studies that explore the unknowns underlying these assumptions, provides new observations that modify our understanding of them, and integrates all available data to provide a more accurate, internally consistent, and mechanistically based model for how radiation damage affects zircon (U-Th)/He thermochronometry. In our studies, we consistently use Raman spectroscopy as a measurement of radiation damage, which allows us to quantify and compare damage extent in natural and partially annealed zircon. Our diffusion data support thermally activated volume diffusion as the dominant He migration mechanism in zircon rather than first order single jump. Furthermore, the data generally confirm the overall trend of diffusivity versus radiation damage accumulation in ZRDAAM. However, they reveal a different correlation between activation energy and damage than previously observed. Thus, we present a new quantitative and mechanistically based model to describe the effects of damage accumulation on the diffusion kinetic parameters activation energy and frequency factor and on the bulk He retention and closure temperature properties. Our annealing study shows that ZRDAAM overestimates bulk damage annealing as function of time and temperature. Our data show that annealing of bulk radiation damage generally requires significantly higher temperatures and longer durations than fission tracks. For example, radiation damage is annealed by only 50% when etchable fission tracks are fully annealed. Although our study shows that the diffusivity-damage correlation used in ZRDAAM is appropriate for the case of damage accumulation, it also reveals that the same correlation is not followed during damage annealing. For damage doses ranging from 7.6 × 1016 to 1.3 × 1018 α/g, the closure temperature (domain size of 100 µm, cooling rate of 10 °C/Ma) of partially annealed zircon is 20 to 40 °C higher than for natural zircon with similar damage. This discrepancy is compounded by the fact that ZRDAAM overestimates damage annealing, which can lead to differences between predicted and actual closure temperatures of up to 75 °C. This work improves our mechanistic understanding how radiation damage modifies He diffusion in zircon by a succession of several mechanisms— increasing damage initially impedes diffusion due to trapping combined with sequestration and then causes diffusion to increase due to amorphous phase expansion. In addition, the work provides radiation damage annealing models and the first data on He diffusion in partially annealed zircon, which in combination allow us to better constrain t-T histories of rocks and interpretations of exhumation and burial histories.