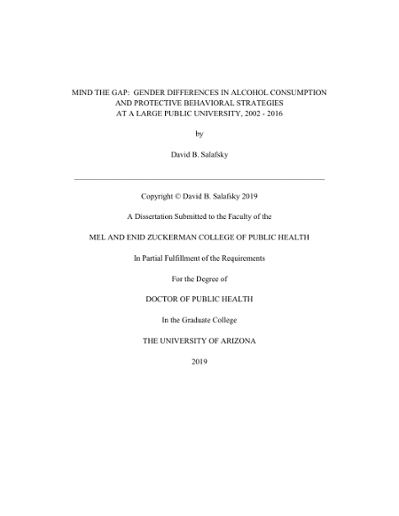 Alcohol use among college students is a persistent and far-reaching public health issue. While some measures of alcohol use within the college population appear to have improved, questions remain as to whether the alcohol use gender gap has been stable or is in a period of change. Protective behavioral strategies (PBS), harm reduction approaches commonly used to address high-risk alcohol use among college students, were also assessed, to determine their relationship with several key alcohol consumption measures for both males and females. Methods: This research summarizes alcohol-related consumption measures based on annual, cross-sectional survey data collected between 2002 - 2016 at a large, public university. Linear regression models as well as descriptive statistics were used to explain overall trends and gender-specific patterns of use over time. In addition, an analysis based on pooled data between 2013 – 2016 was conducted to determine the association between protective behavioral strategies and key alcohol consumption measures, to inform programming that uses these strategies to reduce high risk alcohol use among students, and determine which strategies may be more likely to benefit either males and females for the following alcohol measures: binge drinking in the past two weeks, average drinks when partying and the number of drinks last time consumed alcohol. Both logistic and linear regression models were used to describe these relationships. Results: The results of the 15-year trend analysis revealed significant and meaningful declines among all students in past 30-day alcohol use, average number of drink consumed in the past week, average number of nights students “party” each week, and reductions in the frequency of binge drinking. Looking at the gender gap specifically, these results showed a declining gender gap (i.e. where the difference between male and female use decreased) most notably in average number of drinks consumed in the past week, estimated BAC last time students drank, and past 30 day alcohol use. Based on recent survey results, women showed slightly higher past 30-day alcohol use and reported a higher estimated BAC last time they drank, compared to men. For the second aim of the study, which was based on pooled data collected between 2013 - 2016, most PBS that were expected to moderate alcohol use showed clear and strong protective effects, with a few exceptions. Top strategies for females that were associated with lower alcohol consumption included stopping alcohol use 1-2 hours before going home, avoiding pre-partying and avoiding hard liquor. For men, these included setting a limit on drinks, avoiding pre-parting, and avoiding hard liquor. Conclusion: A number of alcohol measures improved during the study period, and for these, male university students showed greater declines, on average, than females – resulting in a shrinking gender gap. Decreases in the frequency of drinking occasions likely influenced overall declines in average drinks per week and the frequency of binge drinking. Male and female students showed considerable overlap with respect to protective behavioral strategies that were negatively associated with alcohol use and identified a few strategies that may have limited effectiveness. These results highlight evolving trends in alcohol use among college students and point to specific strategies which can help address this longstanding public health issue. Policy and program recommendations, informed by these findings, are detailed in its conclusion.