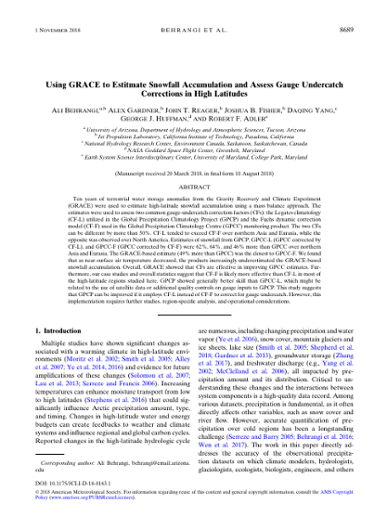 Ten years of terrestrial water storage anomalies from the Gravity Recovery and Climate Experiment (GRACE) were used to estimate high-latitude snowfall accumulation using a mass balance approach. The estimates were used to assess two common gauge-undercatch correction factors (CFs): the Legates climatology (CF-L) utilized in the Global Precipitation Climatology Project (GPCP) and the Fuchs dynamic correction model (CF-F) used in the Global Precipitation Climatology Centre (GPCC) monitoring product. The two CFs can be different by more than 50%. CF-L tended to exceed CF-F over northern Asia and Eurasia, while the opposite was observed over North America. Estimates of snowfall from GPCP, GPCC-L (GPCC corrected by CF-L), and GPCC-F (GPCC corrected by CF-F) were 62%, 64%, and 46% more than GPCC over northern Asia and Eurasia. The GRACE-based estimate (49% more than GPCC) was the closest to GPCC-F. We found that as near-surface air temperature decreased, the products increasingly underestimated the GRACE-based snowfall accumulation. Overall, GRACE showed that CFs are effective in improving GPCC estimates. Furthermore, our case studies and overall statistics suggest that CF-F is likely more effective than CF-L in most of the high-latitude regions studied here. GPCP showed generally better skill than GPCC-L, which might be related to the use of satellite data or additional quality controls on gauge inputs to GPCP. This study suggests that GPCP can be improved if it employs CF-L instead of CF-F to correct for gauge undercatch. However, this implementation requires further studies, region-specific analysis, and operational considerations.