Novel Algorithms for Signal Classification and Security in Wireless Networks 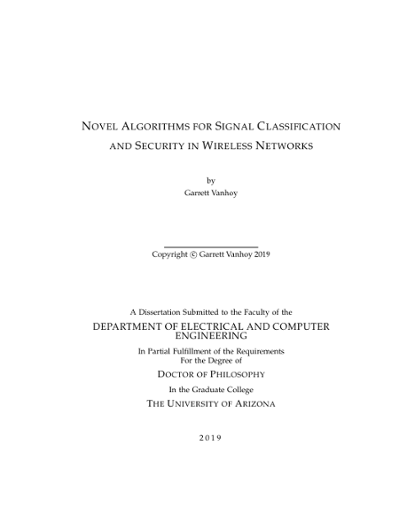 In an increasingly congested and contested spectral environment, it is absolutely critical for a radio to both sense and discern its spectral environment and to make intelligent decisions based on this sensing to achieve various design requirements. In the field of cognitive radio (CR), the direction for decades has been in developing sensing techniques and intelligent agents for the purpose of increasing spectral efficiency, particularly in the context of dynamic spectrum access (DSA) networks where secondary users attempt to fill “spectral holes” left by the primary, licensed users [1]. However, with the scale, scope, and frequency of cybercrime reaching the level of making worldwide news several times per year, many of the existing designs are now being re-examined in the face of such a prominent threat. The cyberattacks that typically make headlines tend to involve an exploitation of vulnerabilities that are specific to particular applications, whereas, for wireless networks, more attention is recently placed on developing security in the physical layer, where both the intended receiver and other radios have unrestricted access to the same wireless medium. In the interest of fulfilling the design requirements of secure systems, engineers are using existing technologies in wireless communications, such as beamforming [2], in a novel way to analyze the capabilities of malicious users. Much of the research conducted on the efficacy of a malicious eavesdropper or jammer is performed in specific contexts in which the eavesdropper or jammer has capabilities similar to those of the radios participating in a network. However, at a time when it is relatively easy to deploy custom radios due to the proliferation of software-defined radios (SDR), understanding the threat of radios that have different capabilities is critical to the security of future wireless networks. With this aim, several stand-alone works, when combined, present a more holistic framework through which all the challenges that malicious users may face in fulfilling their objectives can be understood. Starting with a receiver that can digitize a bandwidth that is an order of magnitude larger than incumbent signals and has no a-priori knowledge, many novel techniques are presented to isolate, classify, and characterize all the activity in a spectrum from the physical layer and beyond. Without a-priori knowledge, it can be said that the eavesdropper is operating in a blind fashion. The first stage of the system tackles the problem of isolating several signals that may exist together in a large digitized bandwidth. This problem is not generally handled blindly, but is performed by exploiting the properties of waveforms that are designed for specific purposes of enabling a receiver to separate signals, such as spreading codes, instead. It is shown here that signals can be separated, using a combination of spectral estimation techniques, polyphase filter banks, and independent component analysis, under the relatively loose assumption that the data carried by each signal are statistically independent of each other and channel conditions are not overly severe. This particular part of the system is generally ignored in the works that are associated with understanding the capabilities of malicious users, but is critical for understanding under what conditions malicious users can even detect a signal that is meant to be protected. After detection and isolation, another challenge is that of identifying the type of signal that has been detected so tht further appropriate analysis can be done. For example, prior to examining the data present in a signal it is necessary to discern how data is being conveyed through this signal, often called modulation, is being used. For many decades, research that examined the problem of modulation classification was dominated by likelihood approaches, as they are statistically optimal in performance but are difficult, if not impossible, to implement in a blind system due to their inability to handle large sets of modulations or rich channel models. Classifying signals based on theoretically derived features is long seen as a more viable alternative for implementation as opposed to the likelihood approaches, but these techniques have also faced a limitation in regards to the richness of the channel models in which they can be applied. In that vein, this dissertation demonstrates the usage of a few common expert features in combination with modern machine learning techniques that can be used to classify a set of 10 entirely different modulations in channel models, which include common radio impairments that are often left out of both of the two previously mentioned approaches. In addition, along with the recent development of deep-learning techniques developed in the computer-vision community, it is shown how a set of 29 different modulations can be classified using only 128 complex samples. A subsequent problem after classification is related to decision-making based on the actual data present in the signals. Jamming (also called denial of service attacks) and eavesdropping have been studied extensively in the context of wired networks but have recently received more attention as a result of several works that demonstrate how encryption techniques can be bypassed by eavesdroppers, capturing the so-called side-channel information (SCI) [2]. The limitation of most current research in intelligent jamming and eavesdropping lies in their dependence on being able to accurately read the information in a physical layer frame. This work is justified in many cases because the physical layer headers, which contain the modulation being used in a frame, are often not encrypted. However, this practice of keeping the headers unencrypted may stand to change in the interest of security [3]. Therefore, in this section, a technique is demonstrated that can be used to accomplish intelligent jamming while assuming that the bits in a packet are encrypted and/or obfuscated to the point that their meaning is useless. This technique represents the beginning of an exploration of how even layers above the physical layer may need to be adjusted in order to prevent attacks from malicious users.