Power and Subjectivity in English and American Literature 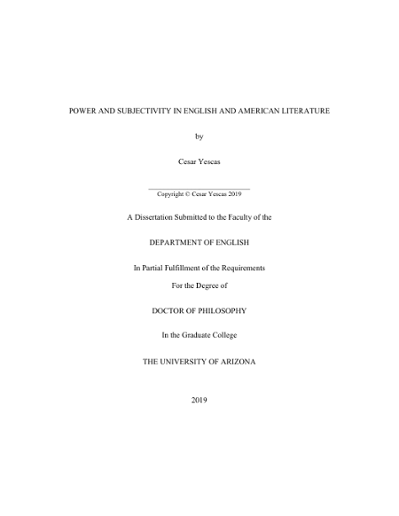 The following identifies the areas of research and the two fundamental objectives of my dissertation. My first goal is to connect the concepts of biopower and governmentality (derived from Michel Foucault) in a reasonable and concise manner to the analysis of English and American literature. First, attaching the concept of biopower to literary analysis will help me address the fact that within the last few decades new theoretical perspectives have been developed about the relationship between sovereign power and how to produce and regulate life that should be applied to the comprehension of literature. Furthermore, employing the notion of governmentality (art of government) to analyze literature will permit me to utilize an intersecting and common vocabulary and approach whether I am relating works of literature as wide-ranging as Charles Dickens, George Eliot, Joseph Conrad, James Welch, D’Arcy McNickle, or Graham Swift to the prisms of ethical self-government or the government of states, economies, populations, and individuals. Finally, utilizing governmentality and biopower as concepts will provide me with a theoretical grid of intelligibility that allows me to link the analysis of literature to the study of socio-political and ethical phenomena in a way which does not bind them too closely together with a particular overarching narrative concerned with state-formation or the civilizing process. My second objective is to demonstrate that English and American literature confirm that the merging of life and politics through bio-power is rooted in an exclusionary and racist social cartography that can justify the murder of abject/disposable populations within indeterminate spaces of exception. The claim is that using this method to analyze literature will help me address that although Foucault’s formulation of biopower entails that sovereignty has distanced itself from discipline and its capacity to inflict death with a power to foster and distribute within a given territory higher value and utility to life, he also conceded that it can facilitate the murder of entire populations that do not substantiate the biological existence of the dominant racial community: “If genocide is indeed the dream of modern powers, . . . it is because power is situated and exercised at the level of life, the species, the race, and the large-scale phenomena of population” (Foucau1t, History of Sexuality 37). Furthermore, my assertion is that repositioning the logic of biopower within a geographical topography is important for the following reasons. First, it will permit me to confirm that English and American works of literature reveal that the model of sovereignty over life leads to the spatialization of abject populations by multivalent repressive state apparatuses and rebel war-machines that attempt to manage and subjugate them to the point of death. Second, identifying the exception as a topological figure in English and American literature will make obvious that the particular spatial materialization of the exception is the consequence of evolving and dynamic sets of techniques of power and not the consequence of preconceived classifications. Third, employing the exception as a topological figure in literary analysis will disclose how through unfixed and unlocalizable processes of human transformations the modern biopolitical state (in conjunction with forms of organizational accumulation involving dispossession and death) has produced disposable populations. As a final point, the proposition is that employing this theoretical framework will help me reveal that English and American literature clearly illustrate how cultural practices celebrating and perpetuating cruelty and indifference have always been major components of life for the wretched within the modern biopolitical nation-state. Deplorably, the implication is that utilizing this method to analyze literature will also corroborate that the political nomos of modernism is an idiosyncratic synthesis of aggression and quotidian necro-capitalist processes that are supported and constructed by the very individuals and communities the diabolical fusion of biopower and sovereignty seeks to annihilate. I plan to employ governmentality and biopower as concepts to analyze English and American literature in the following manner. In the introduction, I will explain how utilizing these two concepts will divulge why the manifestation of modern forms of sovereign power (within English and American literary texts) unyieldingly aspire to economically and politically repress abject human bodies and communities. In the first chapter, I will explore the destructive consequences rapid urbanization, industrialization, and the flow of predatory capital had on abject individuals and communities within the modern biopolitical state utilizing the following works from Charles Dickens and George Eliot: A Christmas Carol, Great Expectations, and Middlemarch. In the second chapter, I will examine the genocidal consequences of European imperial sovereignty within colonial contexts making use of Joseph Conrad’s Heart of Darkness. In the third chapter, I will analyze a multiplicity of texts to substantiate that the modern bio-political nation-state (in combination with necrocapitalist modalities) sought the exploitation and destruction of dislocated and socially destabilized abject individuals and communities. In the fourth chapter, I will explore through the following works how individuals and communities confronting racial repression (within modern bio-political nation-states) have historically defied (threat) governmentality, rapacious capitalistic modalities, and the homicidal logic of biopower: Of Mice and Men (John Steinbeck), Winter in the Blood (James Welch), and The Surrounded (D’Arcy McKnickle). In conclusion, my objective is to examine a variety of literary texts employing an analytical framework focused on ‘power’ for these following reasons. First, employing this methodology will reinvigorate critical theory with a method of analysis that is keenly aware that the question of the subject must be approached historically and philosophically to contextualize and seriously address that subjectivity is not ahistorical and is dependent on social context. Additionally, it will make critical theorists accountable for disseminating to abject individuals and populations that their status as the living dead ensures that they will be enveloped in an unrelenting battle against iniquitous forms of sovereign (governmental) power that malevolently seek to instrumentalize their subjectivity and ensure their social, economic, political, and physical death.