A Society of Individuals: Worker Differentiation and Collective Behavior in Social Insects 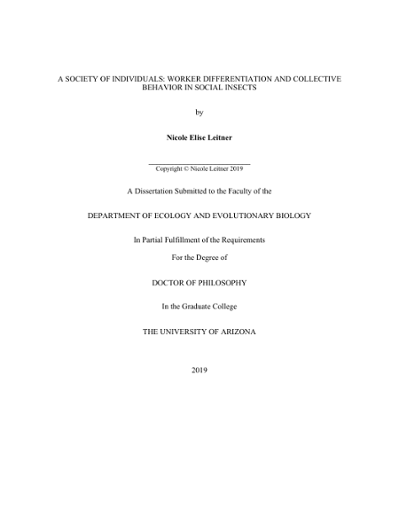 Individuals are not identical. Organisms of the same species usually exhibit diverse phenotypes, a phenomenon that extends not only to physical characteristics but to behavior as well. Indeed, consistent differences in behavior across individuals are now well cited across the animal kingdom and have been shown to be an integral part of the ecology and evolution of an organism. Yet, the proximate, physiological mechanisms upon which natural selection might act to either favor or eliminate variation is often not known. Here, I use social insect division of labor – essentially an exaggerated form of behavioral variation in which nestmate workers specialize in different tasks – as a study system for exploring potential neural mechanisms of inter-individual behavioral variation. This investigation also led me to test and review one of the most widely accepted hypotheses for division of labor, the results of which provide new and important insights into how and why social insect workers choose different tasks. In my first chapter I explored variation among Temnothorax rugatulus ant workers in their peripheral sensory organs, a potentially important, but often overlooked, source of behavioral variation (or, in the context of social insects, task specialization). The idea for this study was based on the popular “response threshold” mechanism for division of labor, whereby workers become specialized in tasks because they vary in their response (often assumed to be ‘sensitivity’) to task-associated stimuli. Potentially, variation in worker sensory organs might influence a worker’s ability to detect such work-associated stimuli. Though workers showed considerable variation in the number of antennal sensory structures, this variation was not related to variation in worker behavior. This led to my second chapter, in which I directly tested the response threshold hypothesis in T. rugatulus ants. Here, I found no evidence for individual variation in response thresholds to three different putative task stimuli, calling into question the ubiquity of this mechanism as a general driver of social insect division of labor. To follow up on this idea, in my third chapter I performed a comprehensive review of the response threshold hypothesis in the social insect literature and found that the empirical evidence for it is not as strong as is commonly assumed. This chapter also provides guidelines for how to test response thresholds, with the goal of becoming a valuable reference work for those studying both social insects and self-organization in complex systems in general. My last chapter scaled up to the colony level. I explored plasticity and constraint in task reallocation by challenging colonies of T. rugatulus with different types of perturbations. By considering multiple types of tasks, this study provided novel insight into how the variety of tasks a colony performs are regulated quite differently. Here, I found that colonies were able to achieve considerable flexibility through the use of two different strategies. Which strategy the colony used was task-dependent. In addition, colonies appeared to have two types of reserve workers upon which to draw when task needs increased, dependent on task type.