The Effect of Sentence Contexts on Second Language Word Recognition 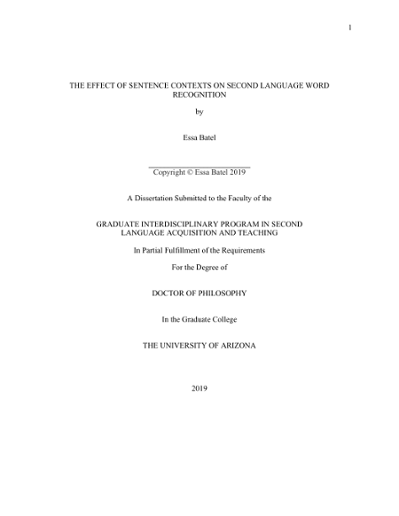 This dissertation consists of three experiments testing various aspects of sentence processing in non-native English speakers. Experiment 1 tested the effect of constraining sentence context on word recognition time (RT) in the first and second language. English language learners (L2) and English native speakers (L1) performed self-paced reading and listening tasks to see whether a semantically-rich preceding context would lead to the activation of a probable upcoming word prior to encountering it. The pre-access prediction model (e.g., Altmann & Kamide, 1999; McClelland & Rumelhart, 1981) posits that when the preceding context is semantically high-constraining, the perceptual system anticipates a probable upcoming word prior to encountering it. In contrast, the post-access model (e.g., Fodor, 1983; Forster, 1981; Traxler et al., 2000; Van Petten & Luka, 2012) suggests that it is only after a word is encountered that a subsequent process integrates it into the preceding context. The integration process is easier and faster when the word is more congruent with the preceding context. In line with these two models of visual word recognition, auditory word recognition is modeled by the Trace Model (McClelland & Elman, 1986) which suggests that spoken word is influenced by the preceding sentence context whereas models such as the Cohort Model (Marslen-Wilson, 1984) supports post-access integration process. Regarding L2 processing, some studies observed a facilitative effect of sentence context on L2 word recognition (e.g., Kamide, 2003) while others found no effect of sentence context in L2 (e.g., Ito et al., 2017; Martin et al., 2013). In the present experiment, the RTs of English native speakers (L1) and English non-native speakers (L2) were collected in both visual vs. auditory word recognition in semantically high-constraint sentences and semantically low-constraint sentences. A linear mixed effects model showed that both groups of participants were faster on a word when it was proceeded by a semantically high-constraining context. This result was observed in both the visual and the auditory modalities, lending some support for a mechanism facilitating access of target words based on sentence context in both L1 and L2. Experiment 2 also investigated the effect of a constraining sentence context on word recognition, but the target words have multiple meanings (e.g., bank: [1] a financial institution, [2] an edge of a river/lake). A self-paced reading task was performed by both English L1 and L2 participants, in which all sentences were biased for the secondary meaning (i.e., bank as an edge of a river/lake). The results showed that L1 participants were able to use the constraining context to activate the secondary meaning, but L2 participants had some difficulty in activating the secondary meaning even when the preceding context was biased for it. The results of the L1 participants are compatible with the Reordered Access Model (Duffy, Kambe, & Rayner, 2001; Duffy, Morris, & Rayner, 1988; Sheridan, Reingold, & Daneman, 2009) in that a preceding biasing context leads to an activation of the secondary meaning equal to that of the primary meaning. However, the results of the L2 participants are not compatible with this model’s explanation. Experiment 3 tested the recognition process of L2 words in formulaic sequences whose co-occurrence happens more often than by chance (e.g., The new job requires a teacher who is highly qualified) compared to a combination that sounds less natural (e.g., The new job requires a teacher who is hugely qualified) in a sentence context. Based on the Associative Relatedness Model (Postman & Keppel, 1970) that underlies the Spreading Activation theory (Collins & Loftus, 1975), a facilitative recognition of a target word occurs as a result of activation from an associated word. Thus, this experiment tested whether L2 speakers are sensitive to the less natural co-occurrence formulaic sequence in the same way as L1 speakers. Both language groups performed a self-paced reading task. The results showed that the RTs of L1 participants on the target word (e.g., qualified in the above example) is significantly longer in the less natural combination compared to the natural one. However, the RTs of L2 participants on both combination types were not significantly different from one another, although the L2 participants were able to detect the less natural combination in the post-experiment test. This result indicates a difference in processing between the declarative knowledge (i.e., the stored facts) and the procedural processing (i.e., putting the stored knowledge into action), which is more compatible with the declarative/procedural model proposed by Ullman (2001). The final part of this dissertation discusses some general aspects of L2 word processing when embedded in sentence contexts and some points to consider when conducting such tasks with non-native speakers.