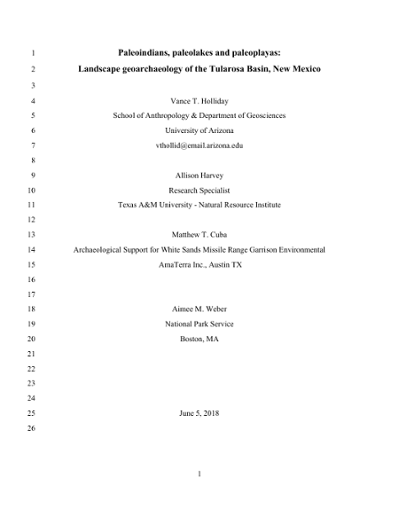 Karl Butzer was one of the first prehistorians to think about and write about people, ancient and modern, on the landscape. Moreover, as a geomorphologist he knew that past landscapes were as dynamic and varied as they are today - not static entities that formed the backdrop for human activity. That viewpoint is critical in understanding the physical environment faced by humans during the early peopling of the Americas (similar to 13,500 to similar to 10,000 cal YBP). North America was undergoing rapid environmental changes as the continent was coming out of the last Ice Age. In the southwestern part of the continent large paleolake levels were falling and smaller playa basins were aggrading as the area was occupied by Paleoindian groups such as Clovis, Folsom, and later First Americans. The paleolakes would have provided some resources, but modern gypsum deposits indicate that lake waters were unpotable. Numerous small depressions (playas) scattered around the floor of the Tularosa Basin contain muddy fills that span the Holocene and terminal Pleistocene, indicative of fresher water at least seasonally. Paleoindian sites tend to be clustered around these small basins and along drainages off of the mountains that flank the basin, as well as settings with good viewsheds rather than the main paleolake margins. Paleolakes were dramatic components of the late Pleistocene landscape in the southwest, but likely were not the primary attractions to the First Americans. (C) 2018 Elsevier B.V. All rights reserved.