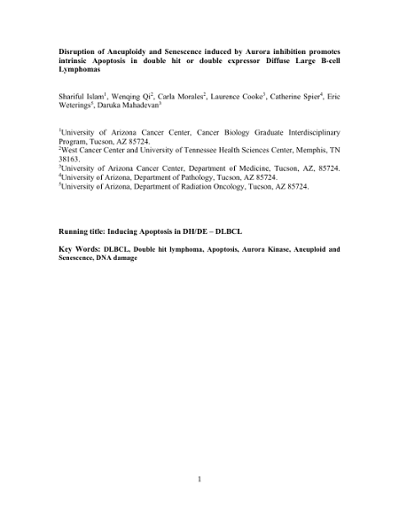 Double hit (DH) or double expressor (DE) diffuse large B-cell lymphomas (DLBCL) are aggressive non-Hodgkin's lymphomas (NHL) with translocations and/or overexpressions of MYC and BCL-2, which are difficult to treat. Aurora kinase (AK) inhibition with alisertib in DH/DE-DLBCL induces cell death in ∼30%, while ∼70% are aneuploid and senescent cells (AASC), a mitotic escape mechanism contributing to drug resistance. These AASCs elaborated a high metabolic rate by increased AKT/mTOR and ERK/MAPK activity via BTK signaling through the chronic active B-cell receptor (BCR) pathway. Combinations of alisertib + ibrutinib or alisertib + ibrutinib + rituximab significantly reduced AASCs with enhanced intrinsic cell death. Inhibition of AK + BTK reduced phosphorylation of AKT/mTOR and ERK-1/2, upregulated phospho-H2A-X and Chk-2 (DNA damage), reduced Bcl-6, and decreased Bcl-2 and Bcl-xL and induced apoptosis by PARP cleavage. In a DE-DLBCL SCID mouse xenograft model, ibrutinib alone was inactive, while alisertib + ibrutinib was additive with a tumor growth inhibition (TGI) rate of ∼25%. However, TGI for ibrutinib + rituximab was ∼50% to 60%. In contrast, triple therapy showed a TGI rate of >90%. Kaplan-Meier survival analysis showed that 67% of mice were alive at day 89 with triple therapy versus 20% with ibrutinib + rituximab. All treatments were well tolerated with no changes in body weights. A novel triple therapy consisting of alisertib + ibrutinib + rituximab inhibits AASCs induced by AK inhibition in DH/DE-DLBCL leading to a significant antiproliferative signal, enhanced intrinsic apoptosis and may be of therapeutic potential in these lymphomas. Mol Cancer Ther; 16(10); 2083-93. ©2017 AACR.