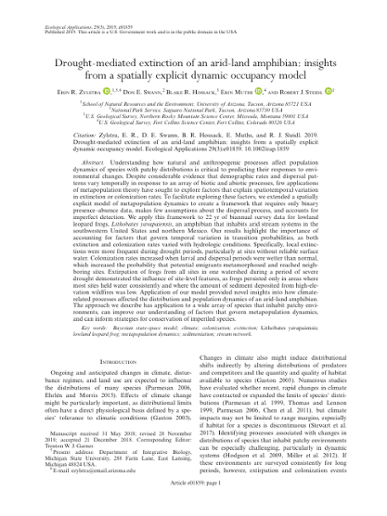 This article is a U.S. Government work and is in the public domain in the USA

Understanding how natural and anthropogenic processes affect population dynamics of species with patchy distributions is critical to predicting their responses to environmental changes. Despite considerable evidence that demographic rates and dispersal patterns vary temporally in response to an array of biotic and abiotic processes, few applications of metapopulation theory have sought to explore factors that explain spatiotemporal variation in extinction or colonization rates. To facilitate exploring these factors, we extended a spatially explicit model of metapopulation dynamics to create a framework that requires only binary presence-absence data, makes few assumptions about the dispersal process, and accounts for imperfect detection. We apply this framework to 22 yr of biannual survey data for lowland leopard frogs, Lithobates yavapaiensis, an amphibian that inhabits arid stream systems in the southwestern United States and northern Mexico. Our results highlight the importance of accounting for factors that govern temporal variation in transition probabilities, as both extinction and colonization rates varied with hydrologic conditions. Specifically, local extinctions were more frequent during drought periods, particularly at sites without reliable surface water. Colonization rates increased when larval and dispersal periods were wetter than normal, which increased the probability that potential emigrants metamorphosed and reached neighboring sites. Extirpation of frogs from all sites in one watershed during a period of severe drought demonstrated the influence of site-level features, as frogs persisted only in areas where most sites held water consistently and where the amount of sediment deposited from high-elevation wildfires was low. Application of our model provided novel insights into how climate-related processes affected the distribution and population dynamics of an arid-land amphibian. The approach we describe has application to a wide array of species that inhabit patchy environments, can improve our understanding of factors that govern metapopulation dynamics, and can inform strategies for conservation of imperiled species.