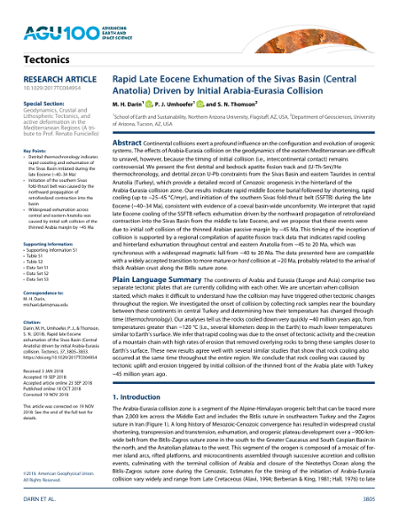 Continental collisions exert a profound influence on the configuration and evolution of orogenic systems. The effects of Arabia-Eurasia collision on the geodynamics of the eastern Mediterranean are difficult to unravel, however, because the timing of initial collision (i.e., intercontinental contact) remains controversial. We present the first detrital and bedrock apatite fission track and (U-Th-Sm)/He thermochronology, and detrital zircon U-Pb constraints from the Sivas Basin and eastern Taurides in central Anatolia (Turkey), which provide a detailed record of Cenozoic orogenesis in the hinterland of the Arabia-Eurasia collision zone. Our results indicate rapid middle Eocene burial followed by shortening, rapid cooling (up to similar to 25-45 degrees C/myr), and initiation of the southern Sivas fold-thrust belt (SSFTB) during the late Eocene (similar to 40-34 Ma), consistent with evidence of a coeval basin-wide unconformity. We interpret that rapid late Eocene cooling of the SSFTB reflects exhumation driven by the northward propagation of retroforeland contraction into the Sivas Basin from the middle to late Eocene, and we propose that these events were due to initial soft collision of the thinned Arabian passive margin by similar to 45 Ma. This timing of the inception of collision is supported by a regional compilation of apatite fission track data that indicates rapid cooling and hinterland exhumation throughout central and eastern Anatolia from similar to 45 to 20Ma, which was synchronous with a widespread magmatic lull from similar to 40 to 20 Ma. The data presented here are compatible with a widely accepted transition to more mature or hard collision at similar to 20 Ma, probably related to the arrival of thick Arabian crust along the Bitlis suture zone. Plain Language Summary The continents of Arabia and Eurasia (Europe and Asia) comprise two separate tectonic plates that are currently colliding with each other. We are uncertain when collision started, which makes it difficult to understand how the collision may have triggered other tectonic changes throughout the region. We investigated the onset of collision by collecting rock samples near the boundary between these continents in central Turkey and determining how their temperature has changed through time (thermochronology). Our analyses tell us the rocks cooled down very quickly similar to 40 million years ago, from temperatures greater than similar to 120 degrees C (i.e., several kilometers deep in the Earth) to much lower temperatures similar to Earth's surface. We infer that rapid cooling was due to the onset of tectonic activity and the creation of a mountain chain with high rates of erosion that removed overlying rocks to bring these samples closer to Earth's surface. These new results agree well with several similar studies that show that rock cooling also occurred at the same time throughout the entire region. We conclude that rock cooling was caused by tectonic uplift and erosion triggered by initial collision of the thinned front of the Arabia plate with Turkey similar to 45 million years ago.