Evidence for multiple 4.0-3.7 Ga impact events within the Apollo 16 collection 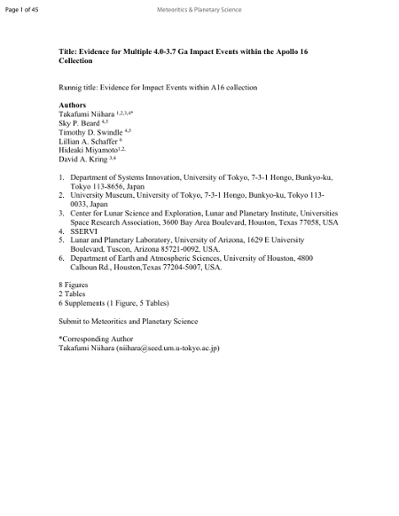 In a histogram of lunar impact ages from the Apollo 16 site, there is a spike circa 3.9 Ga that has been interpreted to represent either a large number of nearly synchronous events or an abundance of samples that were affected slightly differently by the event that produced the Imbrium basin. To further scrutinize those age relationships, we extracted six centimeter-sized clasts of impact melt from ancient regolith breccia 60016 and performed petrological and geochronological (Ar-40-Ar-39) analyses. Three clasts have similar poikilitic textures, while others have porphyritic, aphanitic, or intergranular textures. Compositions and abundances of relict minerals are different in all six clasts and variously imply Mg-suite and ferroan anorthosite target sequences. Estimated bulk compositions of four clasts are similar to previously defined group 1 Apollo 16 impact melt rocks, while the other two have higher Al2O3 and lower FeO+MgO compositions. All six clasts have similar K2O and P2O5 concentrations, which could have been derived from a KREEP-bearing component among target sequences. Eighteen Ar-40/Ar-39 analyses of the six clasts produced an age range from 3823 +/- 75 to 4000 +/- 23 Ma, consistent with estimates for the proposed late heavy bombardment. Four clasts have multiple temperature steps that define plateau ages. These ages are distinct, so they cannot be explained by a single impact event, such as the one that produced the Imbrium impact basin. The conclusion that these represent distinct ages remains after considering the possibility of artifacts in defining plateaus.