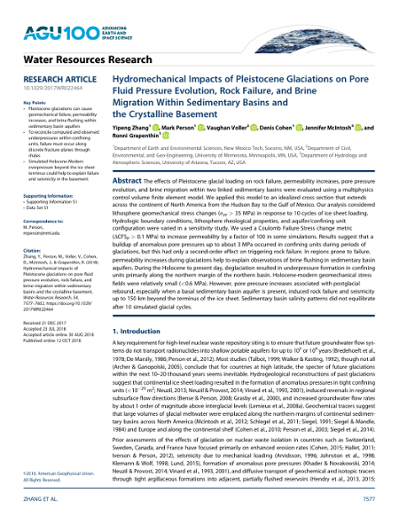 The effects of Pleistocene glacial loading on rock failure, permeability increases, pore pressure evolution, and brine migration within two linked sedimentary basins were evaluated using a multiphysics control volume finite element model. We applied this model to an idealized cross section that extends across the continent of North America from the Hudson Bay to the Gulf of Mexico. Our analysis considered lithosphere geomechanical stress changes (sigma(yy) > 35 MPa) in response to 10 cycles of ice sheet loading. Hydrologic boundary conditions, lithosphere rheological properties, and aquifer/confining unit configuration were varied in a sensitivity study. We used a Coulomb Failure Stress change metric (Delta CFSp > 0.1 MPa) to increase permeability by a factor of 100 in some simulations. Results suggest that a buildup of anomalous pore pressures up to about 3 MPa occurred in confining units during periods of glaciations, but this had only a second-order effect on triggering rock failure. In regions prone to failure, permeability increases during glaciations help to explain observations of brine flushing in sedimentary basin aquifers. During the Holocene to present day, deglaciation resulted in underpressure formation in confining units primarily along the northern margin of the northern basin. Holocene-modern geomechanical stress fields were relatively small (<0.6 MPa). However, pore pressure increases associated with postglacial rebound, especially when a basal sedimentary basin aquifer is present, induced rock failure and seismicity up to 150 km beyond the terminus of the ice sheet. Sedimentary basin salinity patterns did not equilibrate after 10 simulated glacial cycles.