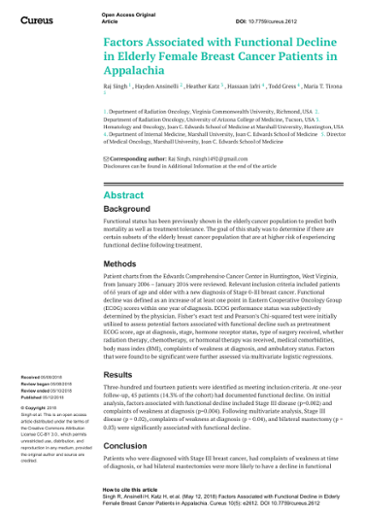 © Copyright 2018 Singh et al. This is an open access article distributed under the terms of the Creative Commons Attribution License CC-BY 3.0.

Background Functional status has been previously shown in the elderly cancer population to predict both mortality as well as treatment tolerance. The goal of this study was to determine if there are certain subsets of the elderly breast cancer population that are at higher risk of experiencing functional decline following treatment. Methods Patient charts from the Edwards Comprehensive Cancer Center in Huntington, West Virginia, from January 2006 - January 2016 were reviewed. Relevant inclusion criteria included patients of 65 years of age and older with a new diagnosis of Stage 0-III breast cancer. Functional decline was defined as an increase of at least one point in Eastern Cooperative Oncology Group (ECOG) scores within one year of diagnosis. ECOG performance status was subjectively determined by the physician. Fisher's exact test and Pearson's Chi-squared test were initially utilized to assess potential factors associated with functional decline such as pretreatment ECOG score, age at diagnosis, stage, hormone receptor status, type of surgery received, whether radiation therapy, chemotherapy, or hormonal therapy was received, medical comorbidities, body mass index (BMI), complaints of weakness at diagnosis, and ambulatory status. Factors that were found to be significant were further assessed via multivariate logistic regressions. Results Three-hundred and fourteen patients were identified as meeting inclusion criteria. At one-year follow-up, 45 patients (14.3% of the cohort) had documented functional decline. On initial analysis, factors associated with functional decline included Stage III disease (p=0.002) and complaints of weakness at diagnosis (p=0.004). Following multivariate analysis, Stage III disease (p = 0.02), complaints of weakness at diagnosis (p = 0.04), and bilateral mastectomy (p = 0.03) were significantly associated with functional decline. Conclusion Patients who were diagnosed with Stage III breast cancer, had complaints of weakness at time of diagnosis, or had bilateral mastectomies were more likely to have a decline in functional status at one-year follow-up. Awareness of factors associated with functional decline in the elderly Appalachian population with Stage 0-III breast cancer will be useful during discussions regarding patient expectations, treatment, and goals of care. Elderly breast cancer patients for whom bilateral prophylactic mastectomies are not indicated may be better served by lumpectomy alone (based on patient age, hormone receptor status, and tumor size), lumpectomy followed by radiation therapy, or unilateral mastectomy to maximize the likelihood of functional preservation following treatment.