Geochemical and Isotopic Assessment of Regional Groundwater Flow and Aquifer Connectivity in the Lisbon Valley, Utah 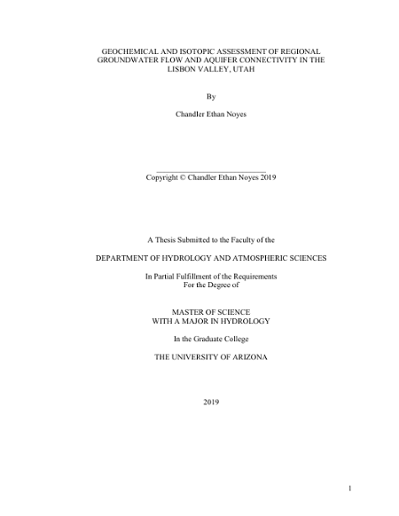 Understanding regional groundwater flow and assessing aquifer connectivity is an important water resource management practice to mitigate migration of contaminants in multiple industries, including the oil and gas and mining sectors. This study focuses on the metal-rich Lisbon Valley of the Paradox Basin in southeastern Utah, where numerous faults may act as conduits or barriers to cross-formational flow. All geochemical and isotopic results show that these distinct aquifers are not strongly hydrologically connected under current natural hydrologic conditions. The upper Burro Canyon Aquifer (BCA) has a calcium-sulfate signature with high TDS and higher concentrations of important ore-forming trace elements, such as Cu, Fe, Co, Mn, and U. Near-zero to negative values of δ34S-SO4 and δ18O-SO4 are consistent with sulfide oxidation in the mineralized aquifer, however the lack of DO coupled with high concentrations of Fe2+ and SO42- suggests the aquifer is anoxic, undergoing iron reduction. The BCA has a less radiogenic 87Sr/86Sr ratio, but higher concentrations of Sr2+, reflective of the carbonate lithology of the aquifer. Corrected radiocarbon ages in the BCA of 3,300-11,000 BP coupled with δ18O and δD values in the range of modern precipitation are indicative of recharge occurring during the Holocene. The lower Navajo Aquifer (NA) contains sodium-bicarbonate groundwater with low-to-moderate TDS, while positive values of δ34S-SO4 and δ18O-SO4 and lower concentrations SO42- are characteristic of eolian sandstones; alternatively, low DO and low concentrations of SO42- indicates an anoxic environment, which would be conducive to bacterial sulfate reduction, which can also produce positive values of δ34S-SO4 and δ18O-SO4. Groundwater in the NA is generally more radiogenic (higher 87Sr/86Sr) than the BCA, but has lower concentrations of Sr2+, characteristic of the higher silicate content of the NA. Corrected radiocarbon ages in the NA of 15,000-36,000 BP, coupled with δ18O and δD values lower than modern precipitation, are indicative of Late Pleistocene recharge, when the climate of the four corners area of the U.S. southwest was 5 to 7°C cooler than today. Principal component analysis (PCA) using major ions and isotopes further affirms the distinct groupings of groundwater observed in the BCA and NA. The regional hydrogeologic model was unable to accurately predict both δ18O and groundwater ages, however the trend of increasingly negative δ18O values with increasing corrected radiocarbon ages was simulated. Furthermore, the model simulated a shallow fresh groundwater system riding on top of a deeper saline system with limited mixing, with recharge occurring at the La Sal Mountains and flowing southeast to the Lisbon Valley, which is consistent with previous work along with geochemical and isotopic data collected for this study.