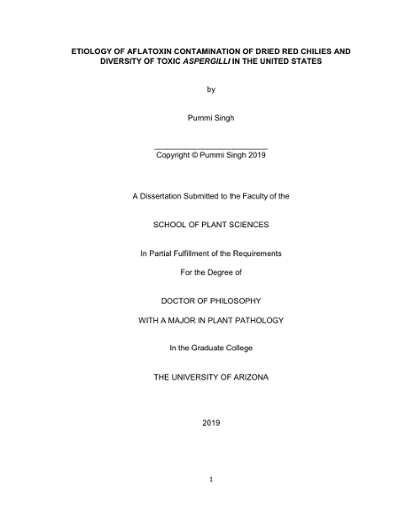 Aflatoxins are hepatocarcinogenic mycotoxins produced by fungi within Aspergillus section Flavi. Aflatoxin-producing fungi frequently contaminate crops including maize, cottonseed, groundnuts, tree nuts and spices. Contamination of food and feed with aflatoxins can have severe health consequences, including death of humans and animals. Crops contaminated with aflatoxins may be excluded from markets, and, if in excess of regulatory limits, destroyed; this creates an immense economic burden for growers of crops susceptible to aflatoxin contamination. The research presented in this dissertation focuses on two areas related to aflatoxin contamination of crops. The first one focusses on prevalence of aflatoxin contamination in market-purchased chilies and etiology of contamination. Dried red chili from the genus Capsicum is one of the most extensively consumed spices worldwide to enhance the flavor, color and aroma of different foods. Most chilies are produced in warm regions of the globe that where the climate favors growth and proliferation of filamentous fungi that produce aflatoxins. Appendix A presents a survey of aflatoxin contamination levels in chilies from markets in the United States (US) and Nigeria, two markets differing in regulation enforcement. Unacceptable concentrations of aflatoxins were detected in two percent of samples from US markets and seven percent of Nigerian chilies. Members of Aspergillus section Flavi were recovered from 40% of chilies from the US, although 64% of the samples were contaminated with aflatoxins, indicating sterilization of dried red chilies prior to sale in the US. Both average aflatoxin concentrations and fungal quantities were significantly higher in Nigerian chilies compared to those purchased in the US. Incubation of un-inoculated chilies under conditions conducive for aflatoxin production led to a build-up of lethal concentrations of aflatoxins in Nigerian chilies, indicating higher risk associated with post-purchase practices of consumers in Nigeria compared to that in US. Appendix B presents identification of aflatoxin-producing Aspergilli recovered from chilies from markets in the US and Nigeria. A precise understanding of the etiology of aflatoxin contamination of crops is crucial for development of mitigation strategies. Investigation of Aspergillus communities associated with chilies and the etiology of aflatoxin contamination conducted using aflatoxin-based liquid culture and crop assays as well as multi-locus phylogenetics showed the occurrence of three distinct aflatoxin-producing species in US market chilies. Of these, A. aflatoxiformans is a non-native pathogen and was imported with chilies originating from Nigeria. Five distinct aflatoxin-producers, including a novel lineage, were discovered in Nigerian chilies. Aspergillus aflatoxiformans was identified as the most important etiologic agent of chili contamination in Nigeria based on its overall incidence and aflatoxin producing ability in chilies. The novel lineage has the “S”, small sclerotium (< 400 µm) morphology, and produces high concentrations of B and G aflatoxins in chilies. Several A. flavus L morphotype isolates were recovered from chilies that did not produce detectable concentrations of aflatoxins in vitro and can be a potential resource for development of biological control agents for preventing aflatoxin contamination in chilies. In Appendix C, an in vitro assay has been developed for distinguishing isolates of A. aflatoxiformans and A. minisclerotigenes, aflatoxin-producing species which co-occur in West Africa, and contaminate major crops like maize, groundnuts and chilies with unacceptable concentrations of aflatoxins. These fungi otherwise have largely overlapping morphologies and aflatoxin profiles and are indistinguishable in the absence of molecular tools. The second part of this dissertation focuses on the genetic diversity of fungi with S morphology within Aspergillus section Flavi due to their highly aflatoxigenic potential. Fungal species with S morphology have been implicated as causal agents of crop contamination in both US and Africa. Appendix D describes a novel aflatoxin-producing species Aspergillus texensis from the US. Appendix E presents characterization of S morphology fungi resident in US soils and crops using phylogenetics, aflatoxin profiles and simple sequence repeat markers. Four phylogenetically distinct groups were identified, each of which produced dangerous concentrations of aflatoxins in maize and should be considered when devising management practices for aflatoxin mitigation.