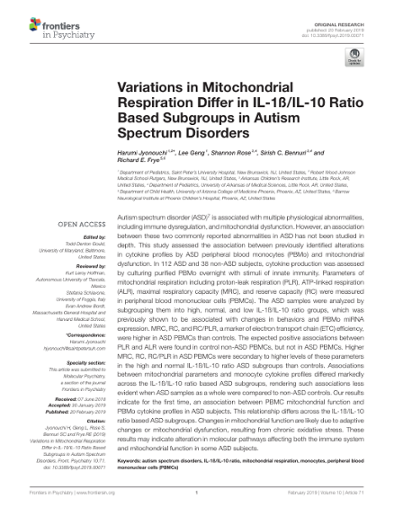 © 2019 Jyonouchi, Geng, Rose, Bennuri and Frye. This is an open-access article distributed under the terms of the Creative Commons Attribution License (CC BY).

Autism spectrum disorder (ASD)(7) is associated with multiple physiological abnormalities, including immune dysregulation, and mitochondrial dysfunction. However, an association between these two commonly reported abnormalities in ASD has not been studied in depth. This study assessed the association between previously identified alterations in cytokine profiles by ASD peripheral blood monocytes (PBMo) and mitochondrial dysfunction. In 112 ASD and 38 non-ASD subjects, cytokine production was assessed by culturing purified PBMo overnight with stimuli of innate immunity. Parameters of mitochondrial respiration including proton-leak respiration (PLR), ATP-linked respiration (ALR), maximal respiratory capacity (MRC), and reserve capacity (RC) were measured in peripheral blood mononuclear cells (PBMCs). The ASD samples were analyzed by subgrouping them into high, normal, and low IL-1 beta/IL-10 ratio groups, which was previously shown to be associated with changes in behaviors and PBMo miRNA expression. MRC, RC, and RC/PLR, a marker of electron transport chain (ETC) efficiency, were higher in ASD PBMCs than controls. The expected positive associations between PLR and ALR were found in control non-ASD PBMCs, but not in ASD PBMCs. Higher MRC, RC, RC/PLR in ASD PBMCs were secondary to higher levels of these parameters in the high and normal IL-1 beta/IL-10 ratio ASD subgroups than controls. Associations between mitochondrial parameters and monocyte cytokine profiles differed markedly across the IL-1 beta/IL-10 ratio based ASD subgroups, rendering such associations less evident when ASD samples as a whole were compared to non-ASD controls. Our results indicate for the first time, an association between PBMC mitochondrial function and PBMo cytokine profiles in ASD subjects. This relationship differs across the IL-1 beta/IL-10 ratio based ASD subgroups. Changes in mitochondrial function are likely due to adaptive changes or mitochondrial dysfunction, resulting from chronic oxidative stress. These results may indicate alteration in molecular pathways affecting both the immune system and mitochondrial function in some ASD subjects.