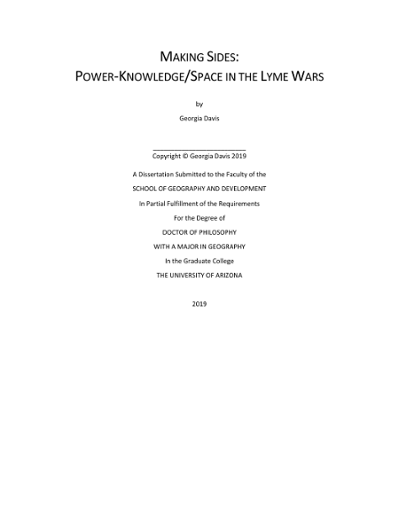 Lyme is the most common vector-borne disease in the United States, with more than 300,000 new cases each year. It is geographically contained to the Northeast, Upper Midwest, and northern coastal California. A case of Lyme is easy to recognize, thanks to its characteristic bull’s eye rash, and is curable with up to 4-weeks of antibiotics. At least, that is the generally accepted truth of Lyme disease. A debate has raged for 30-plus years about Lyme’s geography, etiology, symptoms, and treatment. On the one hand is a “mainstream” group of doctors and researchers, whose authority arises from their positions on the editorial boards of major medical journals and from the institutional backing of regulatory agencies, like the FDA and CDC, and professional medical societies, such as the Infectious Diseases Society of America. On the other hand is an organized “alternative” network of patients, their friends and family members, and sympathetic doctors whose political efficacy has been enhanced by counterweight organizations like the Lyme Disease Association and the International Lyme and Associated Diseases Society. The debate has become so acerbic that many observers have called it “the Lyme Wars”. This dissertation examined the conflict. I combined the work of Michel Foucault, Jacques Derrida, and Derek Gregory to construct a Power-Knowledge/Space (P-K/S) theoretical framework with which to critically examine the mainstream discourse describing Lyme and its contentious politics. The P-K/S framework made visible some of the techniques that hierarchically order society and, therefore, allow for the uneven circulation of power. The starting point was space – more specifically the places invoked by the mainstream camp. That meant coding the data for the most frequently invoked places, which included nature, hospitals, clinics, homes, suburbs, and yards. Then, using Derrida, I noted the binary ensembles enrolled in each of these invocations and how they repeated, were reintegrated, and were reworked across different spatial contexts. The final step was an examination of regularities, or the rules that are enacted by these regularly occurring binary ensembles. This process made visible the imaginative geography that is layered onto these spatial invocations and how it both shapes and limits what places can become and, by extension, the kinds of knowledge differently placed subjects can produce. The project found that the mainstream uses a world-as-exhibit imaginary, which constructs the world as if it is a horizontal plane upon which discrete object-bodies and object-spaces are placed. With this imaginary, mainstream medico-scientists are constructed as experts because of their perceived ability to transcend this plane and gaze down upon it to discern the order of nature. This imaginary also constructs the alternative camp as always already situated and, therefore, unable to see the natural order. The result is an uneven hierarchy whereby mainstream knowledge is considered to be absolute truth and competing viewpoints are automatically disqualified as partial and subjective. This project also found that characterizations of the Lyme Wars, as fueled by an alternative camp resisting mainstream science, miss the way the alternative camp was formed through the very processes used to give the mainstream camp its centrality to Lyme science.